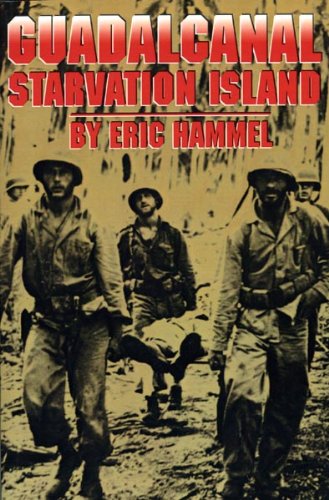 about this book: I began working on Guadalcanal: Starvation Island in the summer of 1961, when I was a fifteen-year-old high school sophomore. I had no idea what I was doing, but I knew I wanted to write military history books for a living. To get started, I read everything I could find about Guadalcanal, including World War II-era copies of The Marine Corps Gazette and Leatherneck Magazine in the main branch of the Free Library of Philadelphia. Somehow--I can't recall how--I located a number of Guadalcanal veterans who lived in the Philadelphia area. These were all men my father's age, or older, but for some reason, they took me seriously enough to submit to interviews, then helped me find other vets from around the country who also helped out. I wrote a complete first draft of the book by the time I graduated from high school, but it took years to complete and until 1987 for it to be published. By then, I had other military history book in print. In the end, I used stories from more than a hundred of the veterans who trusted me with their stories.

The campaign to seize and hold Guadalcanal lasted six months, from August 7, 1942, to February 9, 1943, though the decisive battles took place between late October and mid-November. It was America's first "three-dimensional" battle in that it relied on and was decided by ground, air, and naval components working together. It was by far the most complex operation in the Pacific War. To me, it remains the most interesting operation of the Pacific War. I keep coming back to it: counting Guadalcanal: Starvation Island, I have written six books on Guadalcanal. The others are Guadalcanal: Decision At Sea; Carrier Clash; Carrier Strike; Guadalcanal: A Pictorial Tribute; and Marines On Guadalcanal: A Pictorial Record. Descriptions of and samples from all of them can be found at http://www.pacificamilitary.com
Here is a chapter excerpt from the book, on the battle for Edson's Ridge