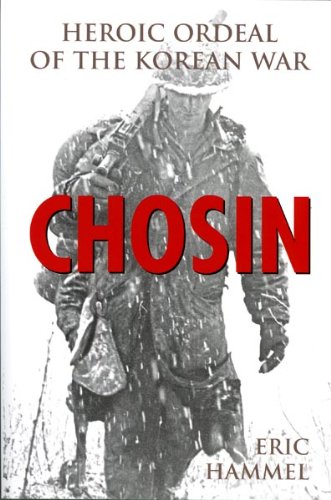 about this book: When Chosin was written in 1979, it was the first unofficial history of one of the U.S. Marine Corps' signature campaigns. It has been continuously in print since 1981. It was one of the earliest books selected for the Marine Corps Commandant's Reading List and the first ever to try to make sense of battles on the east side of the Chosin Reservoir undertaken by three U.S. Army battalions.

The outline of the campaign begins in late November 1950, when the largest part of the 1st Marine Division was concentrating in the North Korean mountain town of Yudam-ni and the rest of the division was strung out in several towns along the division's main supply route, all heading north toward the Yalu River. Several U.S. Army battalions had just replaced Marines on the eastern side of the Chosin (Changjin) Reservoir.

Several armies (corps) of the Chinese People's Liberation Army struck at night in temperatures around minus-30 degrees, before scattered Marine battalions had established a coherent defense of Yudam-ni and other towns. For all that, the Marines held. The Army units also held, but their small numbers obviated an effective defense.

Over more than a week, the Army units disintegrated under immense pressure, but the Marines retained unit integrity and fought their way south from town to town and eventually reached the coast, where they were evacuated.

Chosin: Heroic Ordeal of the Korean War is based mainly on a very limited official documentation and approximately a hundred interviews conducted by the author. Indeed, those interviews form the backbone of the Marine Corps historical archive on the Chosin campaign.