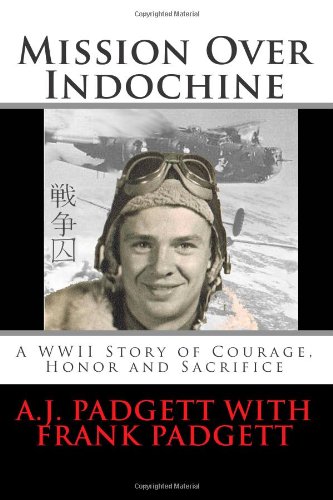 Book: Mission Over Indochine - A WWII Story of Courage, Honor and Sacrifice by A. J. Padgett

about this book: My father was a pilot during WWII, having flown bombing missions from a base in southern China. When I was young, he would tell us tales of his experiences during the Great Depression and going off to war. The stories I remembered most were the ones he told of the war. I knew many of them by heart and recall telling friends all about his adventures. Back then, boys my age were brought up on WWII movies, games and toys, spending hours shooting down airplanes, sinking battleships and playing with plastic toy soldiers. All of us wanted to be a soldier, sailor or pilot when we grew up.

As time passed, many of the stories of my father's experiences faded, replaced with my own. Then, in the mid 90's, there was a renewal of interest around the country in World War Two and the men who had fought in it. It seemed the country was searching for the values those times represented, the selflessness, honesty and integrity that seemed to be disappearing from the new world order. World War Two had been a time of honor and sacrifice in America, as horrific deeds were countered by the courage and heroism of many young men, some mere boys, who went off to fight the Axis and gave it everything they had. The country had come together then as never before, united as one.

The renewed awareness of what some have called "The Greatest Generation" and the fact that its members were aging, made many realize that it was urgent that their stories be written down and saved for future generations. I thought of my father and his experiences during the war and decided that it was time to begin to record his story, for our family, as well as for others.

Unfortunately, right around that time, I began having health problems that affected my ability to write and I could no longer continue with the project. In 2003, I was diagnosed with ESLD (end stage liver disease). The years that followed were mostly a blur. In 2009, I was told that a liver transplant was the only thing that could save my life. I was accepted as a liver transplant candidate by the University of California Liver Transplant Center in San Francisco and moved there to await a donor liver. By late October, my doctors gave me just days, possibly a week to live. Laying in the hospital, fighting to survive, I made a pact with myself that if I should make it through, I would finish this book. Maybe it was because writing it was a goal, something concrete and doable that I could shoot for. Or, maybe I saw some similarities in what was happening to me and what had happened to my father. I'm not sure.

On October 28, 2009, a liver was found and I went in to surgery that night. After nine hours of surgery, I was wheeled into intensive care with a new liver and life. In the months that followed, I began the journey back to health. I had to focus my awareness entirely on rebuilding myself, concentrating completely on coming back. It was tough and there were times when I thought I would never regain control over my life.

Eventually, my life became my own again. There was an easing of restrictions and medication. Gratitude replaced my fear that something would go wrong. I began feeling that I really was going to survive. I was on solid ground again.

By then, my father was in his mid eighties. I had lost so much writing time while I was sick, I knew I had better start hustling if I wanted to do what I had promised myself when I was laying in the hospital. It was time for me to get going and finish what I had started.

This is the story of my father and his remarkable generation. How they grew up in a hard pressed America, went off to war with the lucky ones returning to an America of new possibilities. It is a story of what happens when a country pulls together with a common goal, a lesson for this new age of dirty politics, machine gun consumerism and in your face television.

There are many men who, when called to service, unselfishly did what their country asked of them. My father answered the call bravely, putting his life on the line time after time, enduring extreme cruelty and deprivation with honor and humanity intact.