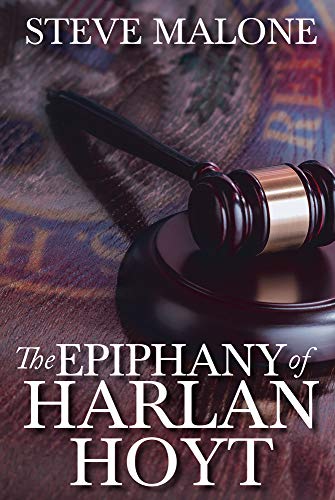 Book: The Epiphany of Harlan Hoyt by Steve Malone

about this book: My favorite stories are epic struggles in history told as documentaries or fictional accounts that faithfully follow real events. Average people are caught in the center, sometimes against their wills and, nevertheless, decide to see each storm through when their own lives are the wager. These struggles are noteworthy as clashes of absolute right against wrong. My heroes are on the right side even if they lose the fight as has happened.

Some storms are ultimate catastrophes such as war. Some are local such as the fight to save one vulnerable soul. These clashes lift civilization every time.

The Epiphany of Harlan Hoyt is such a story. It has been replayed in the United States several times in very recent memory. It was taken from headlines repeated often over at least the last 75 years but really since the nation's beginning.

I want my main characters to be likable, while flawed at times. I want their fight to be compelling, maybe preordained because of their own character. I want my readers to identify with them and think they would and will do the same because it's the right thing to do. They would and will stay the course even when well-meaning advisors tell them to back off for their own good.

The story is also about hubris and revenge administered by the most powerful people in the world for their own reasons. They have perfected the art of destroying people who have harmed no one except with ideas counter to their plans. Their targets just must think for themselves. Powerful leaders destroy these people to make themselves look better to their admiring masses.

I want my readers to remember that this is really what makes us human and hasn't changed ever in the history of civilization. While external forces, connections, and technology have evolved, what really makes us human has never changed even a little.

Finally, this story is about redemption if we just seek it or are lucky enough to have it fall on us. I want the story to be fun in the same way I want life to be fun. In a free society, life is too short to waste it in hatred, anger, and hostility. Continuous hatred, anger, and hostility should never be rewarded. Honor and decency with optimism should always be the goal.