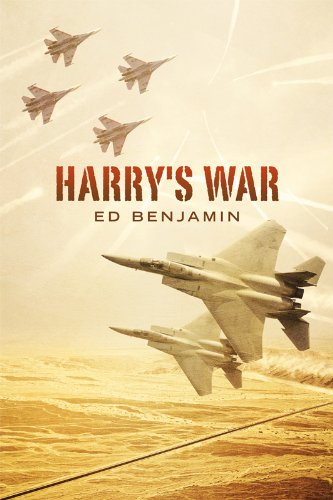 about this book: Harry’s War tells the story of a United States Air Force fighter pilot who finds himself embroiled in a deadly air battle between him and 8 Iranian jet fighters. The attack is an Iranian reaction to the economic sanctions the international community has placed upon Iran to convince the country to abandon its nuclear energy research and development of a nuclear weapon. These fighters have shot down Harry’s wing man and Harry is alone except the electronic monitoring performed by a Boeing 707 Air Control and Warning aircraft located about 100 miles away providing electronic surveillance for the air battle.

Professional combat veteran’s have described the air battle sequence and the “best description of air to air combat they’ve read” and others have said, “Benjamin puts you right in the action of an air battle and makes you feel you are there.”

Then Harry must deal with the human consequences of the battle.

Any lover of a story which deals with the endurance of the human spirit must read this book. The air combat is an added bonus.