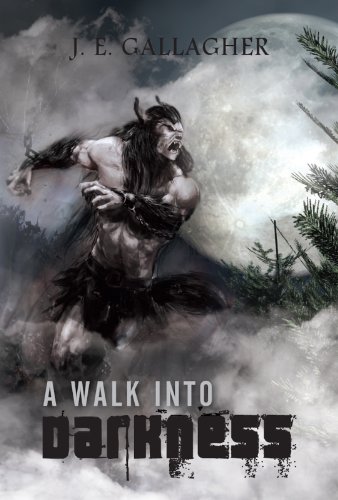 Book: A Walk Into Darkness by J.E. Gallagher

about this book: Long ago, the ancestors of the Native Americans living in Northern Idaho used dark magic to harness the power of the predatory animals of nature and fused that energy with men to create an abomination of nature so savage, with a blood lust that is only quenched by the souls of the innocent. After archeologists, unearth the long lost sacred text for performing the ritual, elite members of the intelligence community descended upon the scientist with the sole intent of possessing the power of the creature for their own selfish ambition. Meanwhile, Marine Captain Mac McKenzie and his loyal team of special ops warriors pull off the mission of a lifetime; the rescue of two American hostages being held by Muslim insurgents in Iraq. By Presidential decree, Mac and his men are ordered to Washington D.C. to entertain an offer that would change each of their lives forever.

When Mac's morals are called into question, all hell breaks loose, and the men are forced to disobey orders to save the lives of innocent civilians. This decision would come to haunt each of them as their lives become entangled in the middle of a government conspiracy that threatens both the national security and the integrity of the United States of America. Mac and his men must search for answers, before time runs out, and their ultimate showdown with destiny begins, for lurking in the shadows is an ancient evil, so primal, so elemental, its very existence has been stricken from recorded history. Follow these four men as their lives spiral out of control and become destined on a collision course with a creature only rumored to exist in legend.