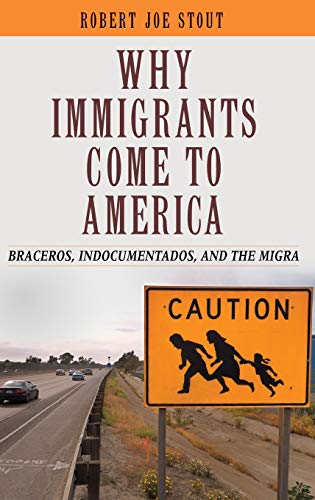 Book Review: Why Immigrants Come to America - Braceros, Indocumentados, and the Migra by Robert Joe Stout

about this book: Why Immigrants Come to America plunges the reader into the social and political upheaval that the "immigration question" exerts on 21st century America. As a journalist working in the United States and later in Mexico I shared frustrations, hopes, accomplishments and tragedies with hundreds of immigrants and immigrant families. These personal encounters, conversations, interviews and newspaper accounts that I wrote provide with I believe is a vivid and accurate picture of indocumentado life, both in the workplace and at home. They highlight the successes and failures of over sixty years of political seesawing that has granted citizenship to over three million former Mexican nationals and left another seven million in limbo. It examines why six decades of surveillance, pursuit, raids, fences and deportations have only slightly altered, but not stemmed, the immigrant flow and describes conditions south of the border that lead to immigration, how immigrant communities spread across the United States and the hazards that many crossing the border in search of better lives have undergone.


Why Immigrants come to America?

I haven't read author Robert Joe Stout's book yet, but being an illegal immigrant in Europe for many years before documented, it seems my experience which is now published as 'Overseas Chronicle-The Rome and Amsterdam Experience has some answers to his question.

It is the pride of every great nation to be known globally. They thrive to achieve this success because they are financially independent. They have the best schools, jobs, infrastructures, in fact the best of everything. America is one of such great nations.

Therefore if one is hungry because of poverty, where do you think the one will go? Poverty is the main cause of emigration. In this case no matter how America secures its borders, Mexicans will always try to penetrate, because the share common borders.

Europe looted Africa to build its treasures and left the continent in a very deplorable state. Today immigrants from Africa are all over Europe trying to enjoy what was stolen, without any solution to immigration problems. Emigration can be controled but can't be ceased.

In my opinion the best solution to halt immigration is the rich nations helping the poor countries to create jobs for its citizens. But this is what many rich nations aren't prepared to do because of the fear of the poor nations becoming financially independent like them.

The master wants his slave to polish his shoes everyday. If the slave becomes a master who will polish the master's shoes?