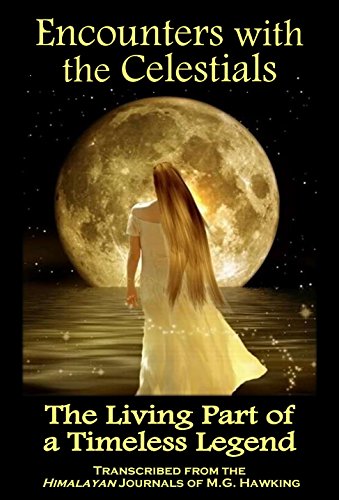 Book: Encounters with the Celestials, The Living Part of a Timeless Legend by M.G. Hawking

about this book: Explore the Most Profound Mysteries of the Ages...

The ancient creation stories of indigenous cultures worldwide relate that their progenitors came from the stars. Native Americans recount that their antecedents, "The Star People," descended from the sky. Egyptian mythology relates that their gods came from Orion and Sirius. The builders of Teotihuacan relate that their gods came from the "heavens." The Sumerian, the Maya, and many, many others, all tell the same story in different ways in different languages: Their ancestors came to Earth from the stars and created human civilization. These cultures were greatly separated both geographically and chronologically, yet their creation stories are strikingly similar. Why? What could explain this?

Some five-thousand years ago there appeared on the banks of the Nile, as if suddenly descended upon the sands, the first great civilization of known history. No one knows from whence the early Egyptians came, yet no people, ancient or modern, have conceived of building a civilization on a scale so sublime, so great, so grandiose, as the Ancient Egyptians. Their technology of architecture, agriculture, metallurgy, and engineering; the invention of glass and linen, of paper and ink, of the calendar and the clock, of geometry and the alphabet; the excellence and sublimity of sculpture and the arts; the refinement of dress and ornament, of furniture and dwellings, of society and life; the remarkable development of orderly and peaceful government, of education; the advancement of writing and literature, of science and medicine; the first clear formulation known to us of individual and public conscience, the first cry for social justice, the first widespread monogamy, the first monotheism . . . all elevated to a degree of superiority and power that has seldom, if ever, been equaled since.

How were these monumental accomplishments achieved? How did a culture just graduating from a Neolithic stage create one of the greatest civilizations of known history? Where did the Ancient Egyptians' knowledge and sophistication come from?

Explore the opportunity to unlock these great secrets of the ages, far-reaching revelations that for long millenniums have remained hidden under the most intense silence and secrecy. An unprecedented and extraordinary account that is inspirational, thought provoking, and richly enlightening, this is a book that will resound in your heart and mind long after the last words are read.