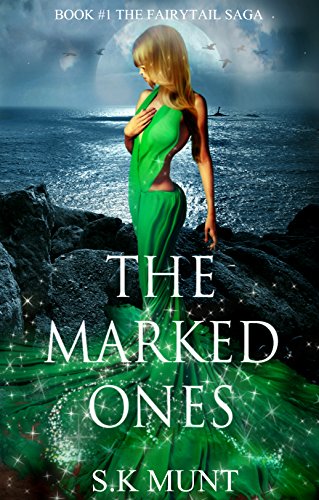 Book: The Marked Ones (Fairytail Saga) by S.K Munt

about this book: I live in the worst town for surfing so why I decided to take up the sport at 28 years old and clueless is beyond me. I blame Hawaii. But that's how I ended up lying on my board all by my lonesome the fateful day that I came up with The Marked Ones, dreaming about mermaids and what could be lying beneath me-because it certainly wasn't a swell.

I don't know what made me turn around, but I suppose you could call it instinct. And there it was, no more than twelve feet behind me and approaching so slowly that it's dorsal fin barely disturbed the water-a tiger shark. And not a little one either, it's markings were distinct.

Ironically, before I'd gone to Hawaii and fallen for surfing, I'd avoided swimming in my beloved ocean for ten years to avoid such an encounter. But I'd reasoned myself into the water with the : 'What are the chances?' mantra.

Luckily, I'd spent so much of my life being paranoid about sharks that I'd already played out in my head, what I was going to do. I looked away from it (It can't see me if I can't see it!!) and exhaled. Then I stroked the water tentatively, holding my breath, going into flight-calmly-reflexes. I looked back and the damn thing was closer-and heading straight for me. But it's pace was so slow. To this day, I'll never even know if it registered my presence.

I saw a tiny set coming in and the moment the board lifted-I paddled like mad and for the first time in awhile-actually caught the wave! When I was fifteen feet from the shore I was up an racing. And when I got to the sand and looked back-there was nothing there. I couldn't believe it. I couldn't breathe or think and the man-eater had just continued on his merry way!

In the Marked Ones, Ivyanne has a similar encounter, only being the mermaid she is, she has a little knack for getting herself off a Tiger Shark's bucket list. She also has a knack for wrapping incredibly gorgeous guys around her finger-and boy-if she's ever needed her siren abilities in her life it's now, that she's attempting to live as a human.

I came out of the beach very grateful for two things that day-the fact that I'd googled 'What to do if a shark comes near you' and thrilled with the concept for a story that would change everything people thought they knew about mermaids. Well, not all of it. I kept the saucy siren stuff!