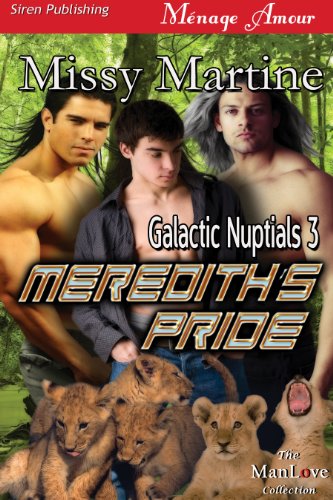 Meredith Carter has always known he's gay. He's lonely, and longs for a love of his own. When he sees an ad for Galactic Nuptials he decides to give it a try. They assure him that a lot of races on other planets take males for mates.

Delsin and Etu have been left in charge of their prides cubs when everyone else was slaughtered in an attack. They know nothing about taking care of children and they need a mate fast. When they get their hands on a Galactic Nuptial catalog they're mesmerized by the picture of an individual with long, wavy black hair, pale, smooth skin, and large, haunted eyes. They rip out the page and send off for their 'bride' Meredith. Nobody told them 'Meredith' can be a man's name.

What will happen when a handsome young man arrives instead of the dainty, young woman they're expecting?

• 5 Nymphs - "I recommend readers read the whole series in order, but it is not absolutely necessary. Meredith's Pride can be read alone. I am looking forward to more in this series."
— Amazon Nymph, Literary Nymphs Reviews

• 5 Angels - "The paranormal aspects added depth and flavor to this very intricate and compelling story. The growing love between Meredith, Delsin, and Etu may have a chance if they can learn to trust in their instincts and each other."
— Teresa, Fallen Angel Reviews

• 4 Hearts - "A sexy love story plays out against the danger brought by the crazed leader of another pride. Angst, action and passion combine to make for a very enjoyable read. This is my favorite book in the series so far. A great way to spend an afternoon."
— Susan P., The Romance Studio

• 4 Kisses - "I enjoyed this story by Ms. Martine and look forward to reading more from this author."
— Tangie, TwoLips Reviews