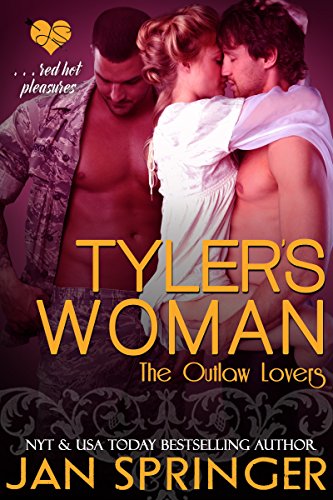 But the virus mutated into many forms, many of which killed women. With too few women around, men have come up with the Claiming Law, allowing groups of men to hunt down the female they wish to take as their wife and take her against her will.

Laurie Callahan is one of those women. Infected by a mutated virus that makes her fantasize sexually, she's been taken by the Barlow brothers, evil enemies of the Outlaw men. When she learns Tyler Outlaw, the man Laurie had thought was long dead after going MIA in the Terrorist Wars, is alive and has come back for her, their scorching attraction flares to newer heights.

Tyler Outlaw endured brutality overseas. He and his cell-mate Hunter have come back to the States fully intent on seducing Laurie into their erotic-filled fantasies. Laurie is shocked to learn Tyler has taken on a male lover, but she's quickly engulfed into a hot world of scorching ménages and sizzling seductions. But what will Tyler do after he finds out she's not the same woman he left behind and that she's now working undercover for the Resistance, a growing group of women and men intent on overthrowing the U.S. dictatorship?

This series has really been intense for me, because I can see that it might actually happen. What would men do if most of the women population died? Would they share their women? How could they fight off other males? Desperate times calls for desperate measures as the Outlaw brothers find out. Tyler's Woman is Book 4 in my Outlaw Lovers series at Ellora's Cave. Resistance – Book 5 is out and I am working on Book 6 – Pleasure Burn.

This series deals with explicit material and ménages. Definitely not for the faint-hearted, so you are warned. I hope you enjoy this series and other stories I plan to bring to you in the near future.