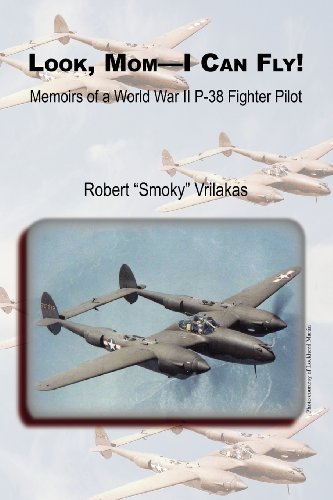 about this book: This story is about a boy who grew up in a very small town during the Great Depression. The sight of an airplane overhead then was a thing of great awe. So much so that, as a young boy, flying was beyond his wildest dreams.

Drafted into the U.S. Army prior to Pearl Harbor he trained as an infantry soldier. Later he applied for, and was accepted into, the Army Air Corp Aviation Cadet program. He describes his training both as a ground soldier and pilot vividly and with some humor. In the later part of his flight training he joined a group of volunteers to fly P-38 “Lightening” fighters. The top fighter of that day. The destination of the volunteers was kept secret from them for security purposes. He along with the volunteers that made it through training and were then sent to N. Africa to be assigned to one of three P-38 groups in the Tunisian area. He was assigned to the famous “94th Hat-in-th-Ring” Squadron where as a member of that unit he flew 51 combat missions in P-38’s in the Mediterranean Theatre of Operations during 1943-44. Each of his missions are described in the book. Some came close to being his last!!

He introduces you to some of his fellow pilots and describes the conditions under which they lived and flew.

The book is acceptable to all ages, appealing to young and adult alike. It is particularly enjoyed by those who either experienced WWII or had relatives that participated in it.

Reviews shown by Amazon and Barnes & Noble have been very positive. Many readers have reported not being able to put the book down until finished.