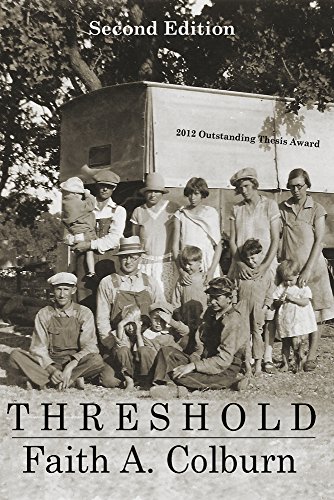 about this book: Threshold: A Memoir began with two images. One came from the stories my grandmother told me about her grandmother, a midwife and folk healer who settled in Nebraska when the territory opened for settlement back in 1854. The second came from a firearm accident that cost my nephew his lower leg.

Hearing my grandmother's stories, I could SEE my great-great-great grandmother in one of her birthing rooms, helping a neighbor give birth by candlelight and the light of a burning hearth. I can only imagine my nephew, under cold, green flourescents of a modern hospital operating theater surrounded by strangers, including a doctor who did surgery he wasn't qualified to do, surgery that resulted in David's amputation a couple of days later.

Throughout my research and writing of the eighteen stories I chose, I wondered how our lives are different among strangers and when we are among friends and family. The research involved thirty hours of interviews with my grandmother and shorter ones with a lot of other people. I got stories from newspapers and county histories scattered from West Virginia to Nebraska. The narrative spans half a continent and eight generations, from an uncle generations ago, kidnapped in 1751 and adopted by a Shawnee war chief, to my nephew's accident in 1993. An introduction and a conclusion establish the themes I've explored throughout.