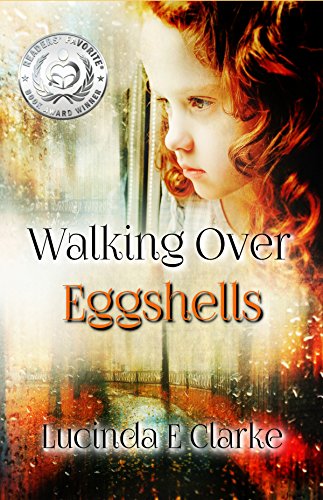 about this book: Walking over Eggshells is an in-depth look at Lucinda's life, an only child brought up by her widowed mother. She tries hard to win her mother's love, but even six decades on she had failed to do that. Through all those years, she never understands why. Isn't a mother's love the most natural and basic of all?

Since she was well trained, she fell in with a man who had many of the same traits, and it took her many years to break free, grow up and stand on her own feet.

It's also a travelogue, as Lucinda and her husband lived in eight different countries, at one time worth millions, at others, deeply in debt.

This is not a depressing book, there are lots of light moments, readers have said it made them both laugh and cry.

Written as an inspiration and to promote awareness of Personality Disorders, it may answer a lot of questions you may have about a family member. It may also help others who are trapped in a relationship with one of the 9% of the population afflicted with a personality disorder.

• "That Lucinda E Clarke can write and write well is not in question. As each chapter opened I could not wait for the continuing saga and adventures to recommence."

• "What a very pleasant read, so good that I had difficulty putting it down. The true story of Lucinda's upbringing by a mother who was unable to give love or support to her daughter gave one an insight into something which is not often voiced."

• "This is a wonderful book if you're looking for a journey through the strength of the human spirit, and as one who has lived and worked in a few third-world countries, the way in which Lucinda copes in new and unfamiliar environments is something I can relate to. I highly recommend this book to everyone."

• "As each chapter opened I could not wait for the continuing saga and adventures to recommence."