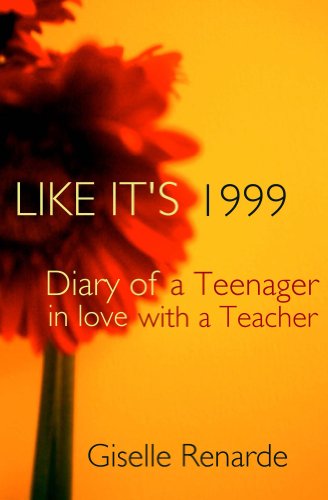 Book: LIKE IT'S 1999 - Diary of a Teenager in Love with a Teacher by Giselle Renarde

about this book: True confessions of a real-life high school student on the cusp of a new millennium.

On the eve of the year 2000, high school student Giselle struggles with spirituality, ambiguous friendships, a family dealing with the aftermath of substance abuse, and deepening feelings of attraction toward her English teacher, a married man more than twice her age. Over the course of one school year, she shifts from seeing Lawrence as a father figure to falling obsessively in love.

Is Giselle making a total fool of herself, or will her teacher return her affection? Having an affair with a student would easily cost Lawrence his career, his wife, and his kids, not to mention his sanity. Will a by-the-books teacher sacrifice everything to indulge Giselle's teenage crush?

LIKE IT'S 1999 is the actual, unabridged, honest-to-goodness diary of a teenager in love with her teacher.

A special note from the author:

Fans of my books might be a little surprised by "Like It's 1999." For starters, unlike everything else I've written, this book is not fictional. It is a genuinely true account of my life.

Should you read "Like It's 1999" as a memoir? Sure! It's a little different from others you may have encountered, though. It's a fusion of my diary and dream journals from the year 1999, when I was an 18-year-old high school student. When I stumbled upon my diary this past January (15 years after it was written), I became oddly hooked. I was intensely into the New Age movement, back then. As an adult child of an alcoholic, I'd just started healing my inner child when an older man--a teacher at my school--caught my eye.

Looking back as an adult, it's easy to see what was really going on, but at that age? Well, we don't always view ourselves with the greatest clarity. I decided to publish this very personal document firstly as a case study, but, more significantly, to share my life with other adult children of substance abusers who may be able to relate to my experience. It's also there for anybody who wants to get deep inside a teenaged girl's head for a little while.