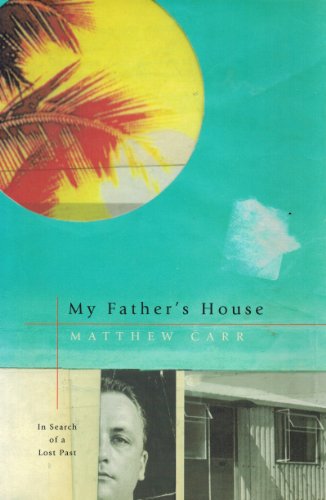 Book: My Father's House - In Search of a Lost Past by Matthew Carr

about this book: My Father's House: In Search of a Lost Past is the most personal book I have written. The book was based on a visit that I made in 1995 to Guyana in the Caribbean, where my parents' marriage had broken up nearly thirty years before, in order to investigate the mysterious death of my father Bill Carr in 1991. A popular and charismatic English lecturer, a lover of DH Lawrence, Shakespeare and Matthew Arnold, and a left-wing political activist with a strong public presence in West Indian politics, my father was also a violent alcoholic who beat his wife and children, and whose alcohol-induced mayhem forced his family to return to England without him in 1967.

My decision to return to Guyana for the first time since 1967 was partly prompted by the confused circumstances that preceded my father's death, in which he seemed to express a wish to return to his native land. My Father's House tells the extraordinary story of what happened on that visit. It is part memoir, part travelogue, part mystery and part philosophical meditation on the nature of memory and the fragility of family relationships, that echoes Graham Greene, Malcolm Lowry and Joseph Conrad. First published in the UK in 1998 by Hamish Hamilton/Penguin Books, it remains the most personal of my five published books, and has been out of print for many years.

It is now available for the first time as a self-published e-book. This is an opportunity for a new generation of readers - including readers in the US, where it was never published - to discover a book that moved many reviewers and readers when it first came out, which The Times described as ' a monumental exploration of the paradoxes of Empire. It is written as if from the pen of a novelist, superbly plotted with a marvellous sense of the intricacies of character and a panoramic view of British and colonial history. Matthew Carr has made astonishing art of his father's wreckage.'