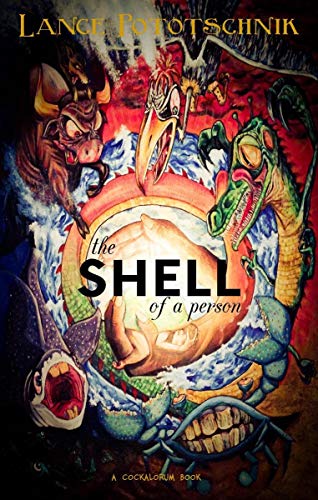 Book: The Shell of a Person by Lance Pototschnik

about this book: Only zebras and idiots get eaten by crocodiles, and here he was. As Lance waded across that river with his bag over his head, he could envision it perfectly. Someone at the local paper would get the story. It would go like this:

"Three young Americans went missing in Costa Rica on Monday. Ivy Tronne and Lance Pototschnik of Maryland, and Wade Dignon of Pennsylvania, are believed to have been killed by crocodiles while crossing a river to a secluded sea turtle refuge at a beach called Buena Vista, which lies on a peninsula that pokes down like a fang from the Guanacaste province into the Pacific Ocean. All three victims were twenty-five or nearly so. Wade was a part-time personal trainer at a small health club; Ivy was a waitress, and Lance, a man susceptible to improvement in almost every aspect of his character, was a substitute teacher and a promotional mascot. They went to Costa Rica because a Google search turned up a one-month stay at the turtle rescue, bed and board included, for $109. It turned out to be a deal only for the crocodiles, which were unavailable for comment."

But that article would be wrong. They survived. And this was no simple vacation. This was a pilgrimage, a spirit-journey. Lance and his friends did not come to Costa Rica to rescue baby turtles. They came to get control of their lives, to find direction and purpose. Instead, they find chaos and danger. Yet, through the pulling riptides, the snapping crocodiles, the charging bulls, the snakes, the raging fire ants, the combined horrors of the wild jungle and the massive ocean, Lance will have his answers, and you will too. Prepare to travel with him.

This is the memoir for an unsettled generation. Through his own story, Lance Pototschnik offers the questions of the brooding, the concerns of the anxious and the hopes of the hopeless in a witty voice that won't shame them. The Shell of a Person is one of the best books written by an emerging author this year.

The Kindle Book Review says: "Never have disgusting, miserable living conditions been so funny. When someone finally finds a way to send back a report from hell, I hope it will be Lance Pototschnik. Except this guy is going to heaven, for the way he writes."