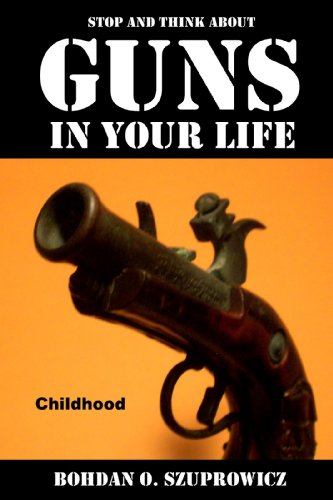 Book: Stop and Think About Guns in Your Life-Childhood by Bohdan O. Szuprowicz

about this book: The author developed a memoir covering over 80 years of his life. It consists of five consecutive volumes dealing with childhood, teenage years, young adulthood, maturity and senior years. Two of the volumes are already published on Amazon Kindle.

A unique approach is taken in writing these memoirs. In each volume the author presents a series of chapters, each of which describes an event in which guns or weapons played a major role.

The author is neither a gun collector nor gun enthusiast, and has never served in any military or armed forces of any kind. The events described from the 1930's to the present time, were mostly unexpected and often unwelcome by the author.

The objective of this approach is to underscore that no matter what regulation and legislation is in place, limiting or even excluding guns from specific social groups and events, it is sheer folly to expect that weapons of one kind or another will not be available to all who decide to use them.

This is particularly true if nuclear terror becomes a blackmail method of choice practiced by terrorists, insurgents, and minorities seeking justice, freedom, and independence. In the face of massive destruction of government security and communication systems, personal weapons will be the only means to assure survival.

The author is also toying with the idea of adding a sixth volume of those memoirs to cover near death experiences. This is a tentative project in case the author undergoes such condition and is later revived. If such an event takes place the author hopes to get in touch with several of his friends who are already dead having committed suicide. The author hopes to obtain from them the real reasons why they decided to leave the earth.