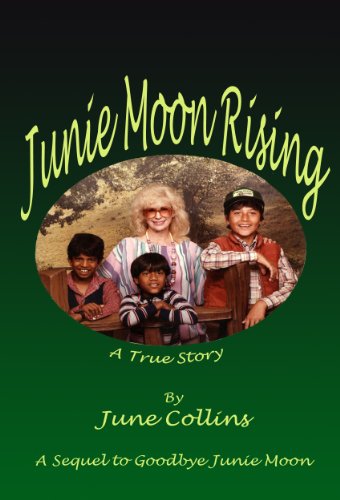 about this book: The on-going adventures of Junie Moon start where Goodbye Junie Moon left off. She is in Washington D.C. after testifying in the U.S. Senate Hearings about corruption in the Army Clubs and Messes System in Vietnam. Her business is destroyed and she is broke. A fresh start in life is impeded due to the depression which she slowly realizes is PTSD.

Now is the perfect time for her to settle down and adopt one of those street urchins she has worried about while living in South East Asia. But how is this possible when she is broke and suffering PTSD? Furthermore, she learns that (in the 1970's) the adoption regulations necessitated she be married...a state she had avoided for many years after one failed effort.

The first step is accomplished when she writes a successful book, but, still preferring the single lifestyle, she throws herself into a life of wild parties. Eventually this grows old and her life takes a number of strange turns until she finally ends up achieving her goals. This is a true story, but although less dramatic than the forerunner, Goodbye Junie Moon, it is still the tale of an extraordinary life in the 1970's when most women were encouraged to stay home and raise babies.