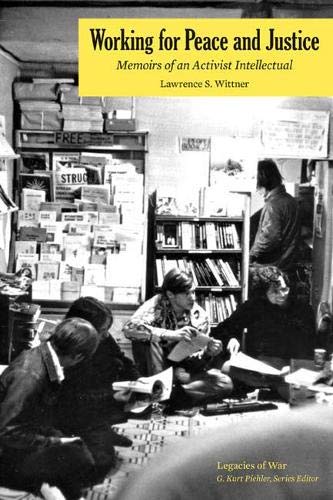 Book: Working for Peace and Justice - Memoirs of an Activist Intellectual (Legacies of War) by Lawrence S. Wittner

about this book: In Working for Peace and Justice, Lawrence Wittner describes his adventurous life -- a combination of cutting edge intellectual work and a half century of leadership in the peace, racial equality, and labor movements. Although many people have viewed political activism as a recipe for suffering, even martyrdom, Wittner shows that it can also be interesting and exciting.

In a number of ways, Wittner was a success in conventional terms. He graduated from an elite, Ivy League institution (Columbia College), taught at top colleges and universities, wrote or edited thirteen books and authored hundreds of articles, was awarded major grants and fellowships, received numerous scholarly and other awards, and became a very prominent historian, retiring (after 43 years of teaching) as professor of history emeritus at SUNY/Albany.

Even so, he also had some unusual experiences. They included being tear-gassed, threatened by police with drawn guns, charged by U.S. soldiers with fixed bayonets, spied upon by U.S. government intelligence agencies, purged from his job for political reasons, and arrested on two occasions. Although his actions did not merit this treatment, much of his behavior was quite unconventional, especially his participation in movement ventures. As a result, he led a very colorful life.