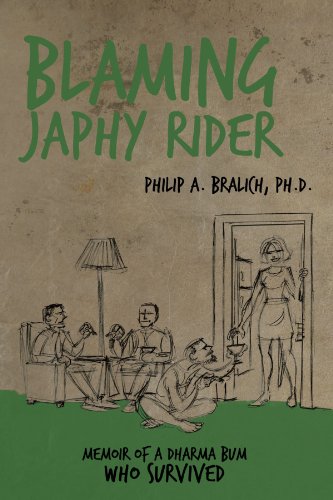 Book: Blaming Japhy Rider - Memoir of a Dharma Bum Who Survived by Philip A. Bralich Ph.D.

about this book: A Life Well-lived.

Inspired by and responding to Jack Kerouac's Dharma Bums, this memoir details the psychological and spiritual triumph over severe psychological difficulties caused by a series of traumas endured in the Peace Corps in West Africa in 1978. Surveying the spiritual landscape of America through the seventies to the present in Zen, Tibetan Buddhist, New Age and Christian movements, this memoir describes the journey of author Philip A. Bralich's life, beginning as a twenty-something, leftist, married, seventies idealist in the Peace Corps in West Africa, through an accident in the bush that cost his wife her life and himself much of the use of he left leg, and through the growing and debilitating psychological difficulties that were finally resolved through wide reading and personal experience of many of the spiritual and psychological movements of those four decades. The book commences in West Africa in 1978 but also goes back to as early as 1973, just four years after Jack Kerouac died.

Video: Blaming Japhy Rider - Memoir of a Dharma Bum Who Survived by Philip A. Bralich Ph.D.