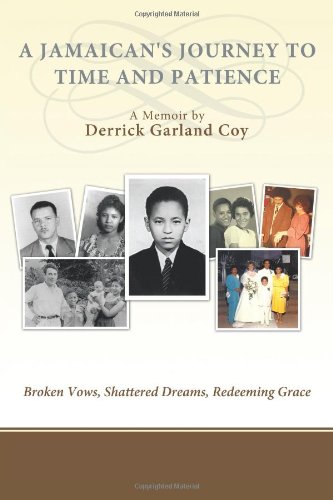 about this book: My book is a memoir about growing up in a dysfunctional family in various countries around the world and about my personal journey of coming to faith in Jesus Christ and seeking to serve God as a filmmaker in Hollywood.

I was inspired to write this book because I have lived a very unusual and interesting life that people have encouraged me to tell my story in a book. I was also inspired to write the book because my family's Chinese/African/English/German/Irish roots are set against the historical background of 470 years of Spanish and British colonial rule over my country of birth—Jamaica and its journey to independence. Finally, I was inspired to write my memoir for my children, grandchildren, and their descendants to give them a published record of their ancestral roots.

The primary readers of my book are people interested in memoirs and autobiographies, especially Christians and people of the Jamaican and West Indian diaspora.

I spent several years researching my ancestral roots on a part time basis, but in 2008 and 2009 I researched full time. I then wrote the first draft in nine months during 2010, and spent the next fourteen months polishing four additional drafts before sending the final draft to the publisher.

My research involved interviews with surviving family members, birth and death records, marriage records, Internet searches, ancestry websites and services, newspaper archives, historical books and articles, and DNA searches on both my maternal and paternal. One of the startling DNA findings was that my father's English lineage was traced back 5,000 years to southern China!

The title "A Jamaican's Journey to Time and Patience" represents a two-dimensional journey—first, the world-wide travels of our family several times over, and second, my spiritual journey in which I learn to wait patiently for God to fulfill his purpose and call for me in his own timing.

The subtitle, "Broken Vows, Shattered Dreams, Redeeming Grace," reflect God's love, mercy, forgiveness, and redemption in the midst of my and my family's dysfunction and brokenness.

I chose this cover because the photos reflect aspects of my life and the various members of my immediate family—my mother, father, stepfather, and pictures of me with my three wives.

The hardest part of writing the book was being willing to expose the ugly side of my dysfunctional family and my own failures, and knowing that this would upset members of my family.

In writing my memoir, I've learned that I have only just scratched the surface of my family's history. An even more in-depth and compelling multigenerational story is possible, and I hope to develop a fictionalized feature film or a television miniseries based on aspects of the different generations of our family.

Readers will benefit in four ways from reading this memoir:

First, they will learn about my family against the historical and cultural context of Jamaica and what caused these original family members to leave their various homelands and come to this island in the Caribbean Sea—the slave trade from Africa under the Spanish and the British, the fierce heritage of the Maroons, runaway slaves who harassed the British army and plantation owners, and the abolition of slavery that gave rise to the indentured program that brought immigrants from all over the world to fill the resulting labor force vacuum.

Second, I believe that readers will be inspired by my personal story—abandoned by my father, a famous national sports figure, reared by a struggling single mother, considered backward in school, not given much chance to amount to anything, rescued by an Irish stepfather, was bullied at school in Hong Kong, became a bully and juvenile delinquent, traveled around the world twice by my mid teens, had a life-transforming conversion to Jesus Christ at age 17, led over a hundred people to Christ as a passionate young believer, studied for the Christian ministry, and served as a pastor until my marriage broke up. I lost my way for a time but came back to the Lord while attending graduate film school in Los Angeles, remarried, and spent several decades on a journey of discovery and service to Christ.

Third, readers who need encouragement in dealing with broken relationships will identify with the stories of unfaithfulness, broken vows, and shattered relationships in this memoir, and will find encouragement and inspiration as I describe how the power of forgiveness and the love of Christ healed, restored, and united my broken family.

Fourth, readers struggling to discover or fulfill God's call or purpose for their lives will learn valuable lessons that I discovered on my odyssey to fulfill God's call as a pastor, writer, and filmmaker. Stressing that God doesn't promise or guarantee worldly success and prosperity in following Christ, I show that God's sole requirement for us is to trust and obey him even in the face of great odds and adversity. And if the readers' deeply-held dreams seem long in coming, I point to Scripture passages that encourage us to press on for our eternal reward in this long-distance journey of life.


• "Derrick Coy has captured the essence of his life's journey with skillful and perspicacious story telling. "
–Omega Medina, former senior manager of the Classical Awards for the GRAMMY Awards

• "…Derrick's journey is one guided by a God who surprises, frustrates, loves supremely and promises us 'the long-distance race of our lives, for now and eternity, a race whose goal and price is Christ himself.'"
–David Dow, Retired CBS News Correspondent

• "This is an extremely well-written memoir and is hard to put down."
–Rev. Dr. Winston A. Lawson, Senior Pastor, Hillside Presbyterian Church, Decatur, Georgia

• "This book will be an encouragement to readers who might be wondering why God seems so slow in opening doors to their goals and dreams."
–Ken Wales, Movie Producer, "Amazing Grace," "Christy," "Islands in the Stream," John Steinbeck's "East of Eden, and other feature films and television movies

• "Its pages remind us once again that the Grace of God comes to us in redemption and endurance, and sometimes, with mystery and a longing for understanding."
–Rev. Dr. E. Raymond Chin, Senior Pastor, Covenant Faith Church of God, Chicago, Illinois

• "As a returning prodigal son, Derrick finds in God the loving father he never had, and the inspiration through which to develop into a loving father to his own children, as well as the Christian husband that God created him to be."
–Rafer Johnson, Decathlon gold medalist in the 1960 Rome Olympics; activist and founding member of the California Special Olympics; actor; and author of The Best that I Can Be (Doubleday, 1998)

• "This is more than a well-written work; it is a road map that speaks to the humanity of all people and the episodes in our lives that cause us to reach down deep into the dark places of our lives and find the small glimmers of light that give us hope—hope to go on and find the strength to continue our journey, hope to find and give forgiveness along the road that leads each of us to his or her journey's end."
–Charles Eric Johnson, award-winning screenwriter, "The George McKenna Story"

• "A Jamaican's Journey to Time and Patience by Derrick Garland Coy is a remarkable memoir that reflects elements of hope, courage, determination and faith."
–Angela Walcott, excerpted from her longer review published in Share, Canada's largest ethnic newspaper, which can be viewed at http://sharenews.com/memoir-reflects-hope-courage-determination-and-faith/

• "It [the salvific love of Christ] is available to us not only when we first discover Christ, but every time we 're-discover' Him and His amazing message of unconditional love."
–Bleeding Edge Guy, in an Amazon review