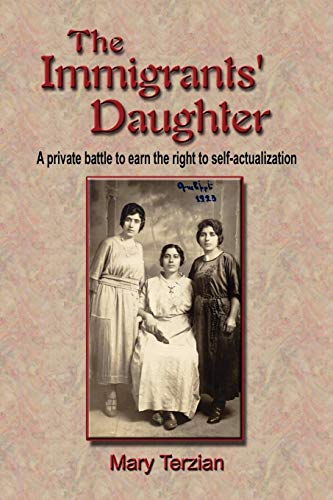 Book: The Immigrants' Daughter - A Private Battle to Earn the Right to Self-actualization by Mary Terzian

about this book: The Immigrants' Daughter is a collection of memories on coming of age in Cairo, Egypt, in an immigrant Armenian community, during and after World War II. It is surprising how experiences taken for granted in one setting are perceived as unique in a different venue - a realization that prompted me to write the book. On several occasions I wanted to ditch it, but it survived somehow. In retrospect, it was a privilege to grow up in Cairo, a culturally vibrant cosmopolitan city with its Babylon of languages that seeped through us like osmosis. I wrote primarily about the struggle to survive outdated traditions in order to obtain at least a high school diploma, a luxury then.

Initially a PEN USA scholarship project in 2001, The Immigrants' Daughter was published in 2005. Digging out information from history and the shriveled memories of older relatives was taxing, re-living the journey was disconcerting despite the humorous breaks, and publishing the book felt like catharsis to me. The title derives from the content. I found the cover photo by chance, eighty years after its original date. My mother stands tall at left, with Aunt Esther and another sister-in-law, circa 1923, soon after their transplantation in Egypt.

The book was written for oppressed and frustrated individuals who have unfulfilled ambitions. It appeals to young and old alike, and will certainly be helpful in countries where women are still undervalued. It is inviting the attention of educational institutions, like Queensland's Department of Education, who have requested a reprint from the prologue for classroom discussion. Reviewers' reviews, lauding the content as "gripping", "captivating", "inspirational", interspersed with humor, and capturing the "universal immigrant experience through (her) personal story" are heartening. Readers' letters reporting about the book's positive influence on their life are the highest rewards I could ever muster. I hope my book will encourage many others, in their relentless pursuit for self-actualization.