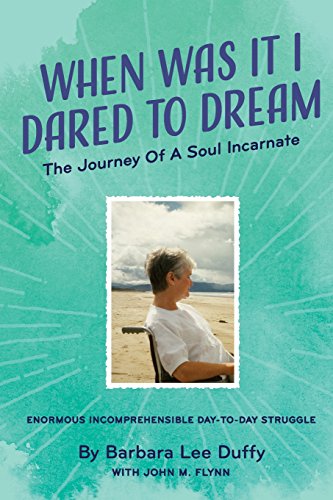 Book: When Was it I Dared to Dream - The Journey of a soul incarnate by Barbara Lee Duffy with John M. Flynn

categories: Book, Ability, Disability, Victory of Spirit, Love, a New Way, Adainst the World, Against All Odds, Adults and Children, Nothing to Everything, Nay to Yea, Fantastic Journey, an Incredible Soul, Memoir

about this book: In the 1950s, Polio descended upon America—a horrifying plague that drove children and adults into Iron lungs to breathe for them until that essential function was returned and they were released from the iron prison to crutches, metal and leather braces and wheelchairs for the remainder of their lives and yet some of the more fortunate among them were left with little more then a slight limp.

My cousin,Barbara Duffy, was one of the worst cases, parallelized from her chin to her toes. She spent eight months in the lung, but did not see or experience it as a prison, or anything like that. Rather it was her protector—her shelter from a world that at the fragile age of seven years had fallen considerably beneath her desires and expectations.

Out of all the children she met and interacted with at Children's Hospital, she had one thing going for her that none of the others did. She knew how she got the Polio and why, but was unable to share that secret with the others, because if she did, they would despise her for telling them.

This memoir is Barbara's story and I do mean, the whole story.

She enlisted me and made me promise that should she pass away before me, that I would edit, finish and publish her story, because she said, "The world needs it."

And that is what happened. Barbara passed away in 2015 and two years later her book has become available to all of those who need it. I might suggest: Practically Everyone.