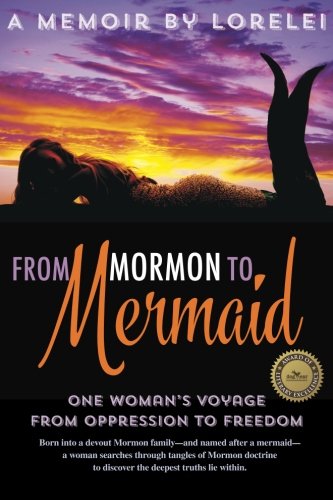 Book Review: From Mormon To Mermaid - One Woman's Journey From Oppression to Freedom by Lorelei Kay

about this book: "From Mormon to Mermaid" tells an explosive story of fifty years living as a devout Mormon woman whose purpose of existence was to obtain the Mormon heaven and live in a forever family where the males become gods.

What do you know about the Mormon Church? Would you like to know more?

These are questions asked by Mormon missionaries, but they probably didn't expect this kind of an answer—a book which tells the real story of what it's like to live the Mormon lifestyle.

While my father was a soldier stationed in Italy during World War II, he heard the enchanting story of the Lorelei—the German mermaid who perches on the River Rhine. After he returned home, still fascinated by the tale, he named his first-born daughter Lorelei.

As a child, I felt embarrassed to have been named for a half-naked siren, but when I started my memoir From Mormon to Mermaid, I claimed my mermaid heritage and used an aquatic metaphor to tell my story. For example, some of my chapters titles are, "Hook, Line, and Thinker," "The Undertow of Underwear," "Prying Open the Oyster Shell," and the chapter on sex, is called, "Wet."

My transformation began when my bishop called me to teach Gospel Doctrine, the scripture class for adults. Like anything else any bishop had asked me to do, I put my whole heart and soul into it. I spent over ten hours a week to prepare for my class each Sunday. As I began to realize the depth of problems in Mormon doctrine, my spirituality changed from a placid sea into a raging torrent. Then, as I tell in my memoir, "All halibut broke loose."

A symbol of transformation,
Mermaids whisper from the sea:
Live true to your inner heartstrings,
And your truth will set you free.

A book of trials and courage that flows like a sea current. The author guides you through 50 years of rough waters and challenging storms with the gentle hand of a mermaid guiding a sailor lost at sea. Nels D. Pearson

"From Mormon to Mermaid" is a perfect vehicle for initiating important conversations about women inside patriarchies--there is much to unpack from what Lorelei shares about her journey. Emily Butler

I couldn't put this riveting book down. Mary Thompson

I was raised Mormon, and left the church at 18. This book was amazing in how it described everything that goes on in the church. Stephanie A.

I think Lorelei's insight would be very beneficial for any woman, young and old, who struggles with the teachings and history of the LDS church. A must read for anyone interested in a woman's perspective of a male dominated church. Mike
A symbol of transformation,
Mermaids whisper from the sea:
Live true to your inner heartstrings,
And your truth will set you free.

From Mormon to Mermaid

I'm in my 80's and had no idea how oppressive the Mormon church is! I knew some Mormons throughout my life and always found them to be hard-working but a bit stand-offish. I used to attend the Episcopal Church and remember a very troubled young man, a former Mormon, who sought counseling with our priest. I believe he was a homosexual.

I applaud Lorelei Kay for having the courage and tenacity to tell her tale. [by Diane Neil]