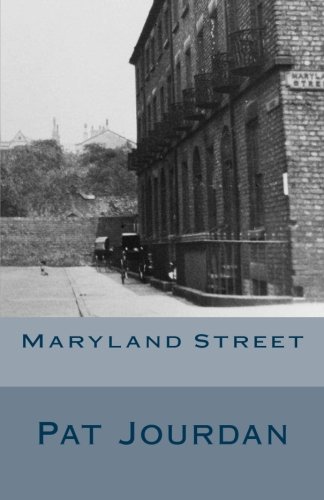 about this book: In the middle of Liverpool there is a street hidden away where the neighbours are mostly linked with the convent opposite. They are also connected spiritually as Catholics. Gradually the daughter in one of the families has doubts about her faith. On a visit to London she falls in love but gets raped too which causes more complications. The book shows the effects on families from the nineteen fifties recovery from wartime austerity, to the racing changes as the sixties approach. Ironically, just at this time, Liverpool Corporation demolishes the entire street and there is no trace that these people ever existed. The convent which has influenced their lives moves away also, the buildings becoming the premises of the new John Moores University.

The cover photograph is of South Hunter Street/ Maryland Street corner, 1912, and the girl sitting behind the railings is the Julie in the story. On the back cover is the actual lamppost that ends the book, with the children playing round it on a summer evening.

This took nearly two years to write, as though it is a memoir many details had to be checked as so much has disappeared. Very little is fictitious, and most of the people mentioned have passed away. As far as possible they have their real names, though a child's viewpoint may have caused some inaccuracies.