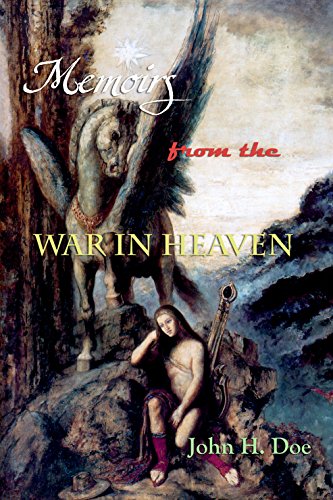 Book: Memoirs from the War in Heaven by John H. Doe

about this book: What inspired me to write this book were events that actually happened in my life. From the title, it would be easy to think of the contents as some sort of speculative fiction or magic realism, but no, that's not it at all. This stuff I wrote down actually happened to me. I try to get down on paper how I experienced all that goes on in the book. You might want to pass it all off as mental illness, except that the mentally ill *lose* contact with reality at some point, whereas what I conceived of instead probes a *deeper* contact with reality, borne by the logic I perceived. It makes sense. There were some drugs involved, early on, and at one point I used to say that I went on an acid trip that I came down from 6 years after I dosed, and that was partially it. But not really. Scientists like to say that there is so much space in the universe, so many different potential planets, so many, that there *must* be life elsewhere. It's just playing the odds. Well, I tell you something you might have observed, too, in this vein: there is so much beauty in the world it *can't* be meaningless. And down to my level again, the visions I had were so logical they couldn't have been just a crazy trip. My book is all about what's written on the tin: these are my memoirs from the actual War in Heaven. Maybe you've heard of it.