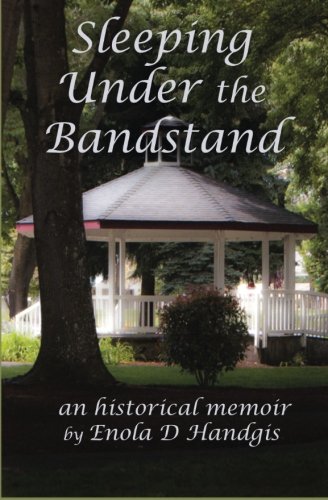 Book: Sleeping Under The Bandstand - An Historical Memoir by Enola D. Handgis

Grant M. Handgis: "Sleeping Under The Bandstand" is a memoir of historical accounts of life in the early twentieth century, by my mother, Enola D. Handgis. I had the honor of combining and editing the accounts of her life, and the times, from the stories she wrote in the oral tradition. The accounts of her life include her troubled childhood and home life as an adopted (red headed) child. They include interactions with her half-brother and another adopted sister, who conspired with her to evade punishments for minor offenses which brought swift retribution.

Once reaching the age of sixteen, her rebelous nature led her on hitchhiking excursions across country to find her biological relatives, whom she found, eventually, yet only after numerous obstacles and personal assault from men who would pick her up along he way. The stories include her reaching New Orleans with dreams of becoming a singing star, only to find a more sordid reality playing out, as well as being lured into a brothel by a man she came to trust along the way. Other stories describe the years of raising three small children on her own after a failed marriage to a military man after WWII, during a time when women were looked down upon for this social indiscretion, with the hardships that followed.

This compilation of stories weave a fuller story of her life's complications and the struggles to overcome them. They convey the inner thoughts and feelings of a woman determined to succeed against all the odds against it. Having edited and compiled the stories of this book over the course of two years was a true work of love, as well as demonstrating my mother's gift as a storyteller. I believe the reader will find the stories of this book to be informative as well as entertaining.