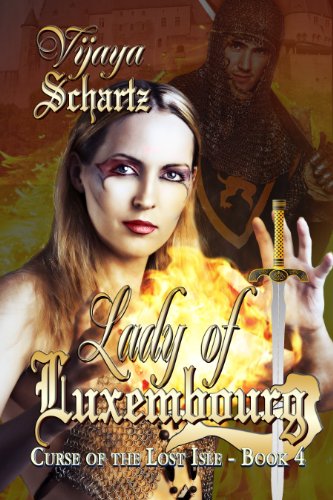 Book: Lady of Luxembourg (Curse of the Lost Isle Book 4) by Vijaya Schartz

about this book: This is Book Four in the series.
Book One - Princess of Bretagne
Book Two - Pagan Queen
Book Three - Seducing Sigefroi
Book Four - Lady of Luxembourg

There is also a special edition that includes the first three book in one download.

After Seducing Sigefroi, Melusine is finally the Lady of her castle, but all is not well in Luxembourg. Traitors, lurk, and the Church becomes suspicious of this dashing couple who doesn't seem to age. And there were several sightings of ondines (mermaids with long tails) in the river Alzette.

Betrayal and intrigue pepper this medieval romantic fantasy series. If discovered, Melusine's immortality and Pagan nature threatens not only her existence, but the life of her beloved Sigefroi as well.

Under duress in a dungeon, threatened by madness, under gruesome torture, can he keep her deadly secret, or will she burn at the stake?

Reviewers give this series five stars and called it "Edgy Medieval" and said things like "Schartz knows drama."

This series, however, comes with a warning. It's bloody and not for the faint of heart. This medieval world is raw and realistic, not sugar-coated, so beward.