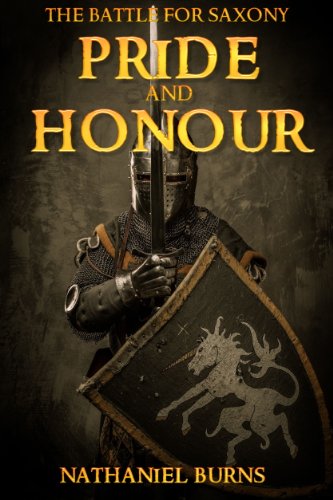 Book: Pride and Honour - The Battle for Saxony by Nathaniel Burns

about this book: I've always been fascinated with swordifghting and especially tales of Camelot or Charlemagne.

After three years of research and six months of writing I published my debut novel "Pride and Honour - The Battle for Saxony", a historical novel set in the dark ages, as an Kindle ebook on Amazon.com in December 2012.

Europe, in the year of the Lord 772. Like a bloody storm, Charlemagne's armies ravage early medieval Europe, leaving devastation and misery in their wake. They have subdued the kingdom of the Langobards, defeated the duchy of Bavaria; they threaten the Moors in the west and, in the south, the pope in Rome.

Yet Charlemagne has even more ambitious plans: he covets the Saxon territories in the north. The Saxons put up an unexpectedly fierce resistance. When Charlemagne's troops destroy the Irminsul shrine, the Saxon holy of holies, there ensues a struggle to the death. Led by the legendary Duke Widukind, for decades the Saxons fight savagely for their beliefs and their independence. And they will have their revenge...

What my readers say:

• "John Lincoln's Blood And Honor, The Battle for Saxony, is an important piece in the puzzle of 8th century history. " — Peter Prasad, Amazon.com

• "Pride and Honour is an excellent and highly entertaining work of historical fiction." — R.Lee Holz, Amazon.com

• "Even though it is set in the dark ages, this story warms the heart with a deLIGHTful bond, trusting, and tumultuous. The characters' relationship transcends time and you are drawn to them from the very beginning." — TJ, Amazon.

Video: Blood and Honour - The Battle for Saxony