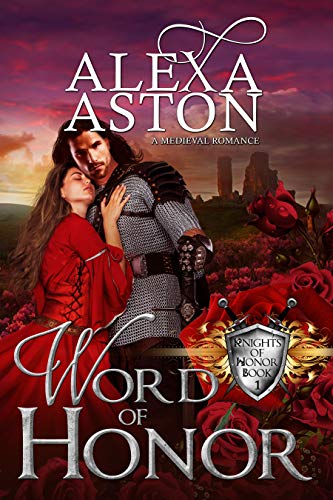 about this book: I gobble up everything related to history and especially fangirl over anything medieval or about the American Old West. As an author of historical romance, I'm always looking for inspiration.

I found it—watching a documentary about POWs in the Vietnam War.

I ached for the separation these soldiers and their families faced, many for five years or longer. That got my creative juices flowing. What if I could turn that idea around and set it in the medieval era? Have my hero and heroine separated for a great length of time?

Thus, after nine standalone romances, my first series, The Knights of Honor, was born.

In Word of Honor, the first book that kicks off the series, I not only had my hero and heroine separated from one another while Geoffrey fought in the Hundred Years' War and Merryn remained home in England. I cranked it up for even more drama. I had Geoffrey return from the war and marry Merryn—only to disappear the day after their wedding . . . for seven years.

When these two reunite, they are very different people. Even worse, Geoffrey has given his word of honor not to reveal where he's been all that time. Will her husband's silence create a rift too large to heal, or can Geoffrey and Merryn recapture the love they once shared?

Join Geoffrey and Merryn as they fight for the love both have held in their hearts despite their years apart.