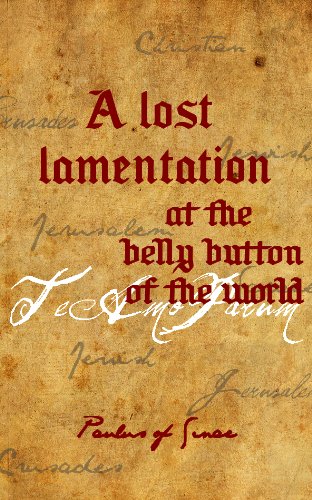 Book: Te Amo Parum - A lost lamentation at the belly button of the world by Po Lo Paul Chan

about this book: What is DNA to you? Is it simply the blue print to our physical appearances and body functions?

It was the year 2020, a group of DNA specialists has uncovered a technology that can unlock memories from DNA. This new technology leads to new insights into the history of mankind.

David Lau was one of the Bioinfomaticians that specializes on this technology. After 10 years working like a slave for his boss (Simon Wong), David decides to go to Jerusalem with Yossi Montefiore, who is a Historian working on the Crusaders of the medieval Jerusalem. while on the plane to Israel, Yossi realizes David is in possession of a golden ring, engraved with "Te Amo Parum" on the inner band. They try to uncover the past of the ring through the memories of the Crusaders, but instead they find a tragic story about love, racism and struggles within the lamentation of the corpses...

Please be noted that although the book begins with prose - like any normal novel, the main narrative of the book is written in verse. I used older English within the verse, just to create this 12th century atmosphere. Also please be warned this book is very dark and very tragic that aims to induce the catharsis out of the readers. I have adopted various elements of drama within the story of the verse.

I studied Biochemistry in my undergraduate studies and I met so many scientists, who are extreme atheists. Then I studied master in Literature. Again I met many philosophers there, who also blame religion harshly. However, is religion the root of all evil? We often associate Crusaders to evil murders. The era of the crusades was also filled with anti-Semitism, racism and religious fanaticism. Therefore to me, situating ourselves in a dark time like that is a very good way to investigate this notion of religion.

The name of the book originates from the BBC documentary Meet the Romans with Mary Beard. Within that series of documentary, Historian Mary Beard shows the audience a golden ring, with the words "Te Amo Parum" engraved on it. The ring is believed to be from Ancient Rome. "Te Amo Parum", in Latin, means "I love you not enough". The message here is actually very peculiar. Why "I" love "you" not enough? Am "I" parting with you, so "I" cannot love "you" enough? I found this ring very mysterious that I cannot help but hijack this ring into my own narrative.

I spent seven months of sleepless nights finishing this book. I ploughed through many different materials about the history of the Crusades and Jerusalem. I also studied Jewish and Islamic traditions, in order to fit the characters into the historical backgrounds. At first the book was only the verse, without the prose narrative. Yet my supervisor from the master program told me that this book was not a contemporary poem and he forced me to change every line according to his own personal taste. In my struggle, I decided to include a prose narrative that can introduce the vintage verse of this book. Therefore this book changes into a hybrid of both poem and prose.

Readers may also find different adaptations of the Bible stories and Greek mythology within the book. I have also adopted a story from the ancient Persian poet - Nizami Ganjavi, and the Bengali Nobel prize winner in Literature - Rabindranath Tagore, to enrich the narrative of the book.

I hope my hard work will be appreciated. I do know many thoughts within the book are controversial. Yet I wrote this book from the perspective of a pacifist. I hope the world will be more tolerating and less oppressive, for love is a kind of tolerance. Are we still human, or even animal, if there is no love within us?