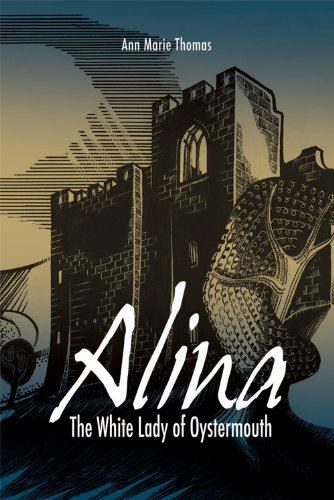 about this book: I live in Swansea on the edge of Gower in South Wales, but until recently I knew nothing about it's history except for its significant industry in the last two hundred years. Before that I assumed it was insignificant, just the crossing-place of the River Tawe. But one day I had my eyes opened. Swansea has a castle in the centre of town, and Gower is full of castles. One day I looked up at the ruins of Swansea Castle and wondered what it was like in its heyday. So I went and found out.

The result was my book Alina, The White Lady of Oystermouth. It tells the story of Alina de Breos, heir to the Lordship of Gower in the early 14th century. Her father had money problems and tried to sell her inheritance, so her husband John de Mowbray seized Swansea Castle. But the king got involved and the other Marcher Lords were against this. John's action started a rebellion that developed into virtual civil war, and ended in Edward II being toppled from the throne. Unfortunately all did not go smoothly, and John lost his life and Alina ended up in the Tower of London!

The title of the book comes from the story that Alina's ghost appears in Oystermouth Castle, and they call her the White Lady. On her release from the Tower she remarried and lived out her life there, building the chapel that has recently been refurbished. Visitors to the castle hear about Alina, but there was no information about her before this book.

The book has a wonderful illustration at the beginning of each chapter, drawn by a very talented art student. The local art college arranged a competition to find my illustrator.

Since I'm no historian, I've written the book as a popular history, and it has sold well in print to tourists and locals alike. But it has full endnotes and a bibliography for the academically minded. It is available on Amazon UK in print and on Amazon and Smashwords as an ebook which has extra chapters. I've become so fascinated by this history that I'm writing another book about the Lords of Gower and King John.