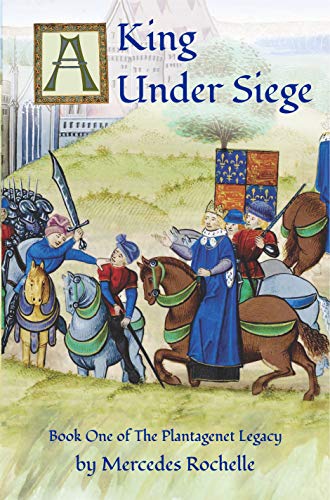 Book: A King Under Siege - Book One of The Plantagenet Legacy by Mercedes Rochelle

about this book: If you're a fan of Shakespeare's play about Richard II—like I was—you might be surprised to discover that the tragic ending was the culmination of 20+ years of struggle between the young king and his nobles—especially his own family. Richard did not have an easy time of it from the very beginning. Crowned at age 10, he faced the horrific Peasants' Revolt at only 14, and still managed to save the day when his elders failed to support him. Throughout his minority he was at odds with his uncles—first John of Gaunt, and then almost fatally with Thomas of Woodstock, the Duke of Gloucester, who persuaded Parliament to execute and outlaw Richard's friends and advisors. Henry of Bolingbroke, who deposed him at the end of the play, was Richard's first cousin. With a family like that, who needs enemies? A KING UNDER SIEGE is volume one of "The Plantagenet Legacy" and takes us through the king's minority which lasted until he was twenty-two, setting the stage for the king's retribution and final downfall.

Video: Book Trailer: A KING UNDER SIEGE by Mercedes Rochelle