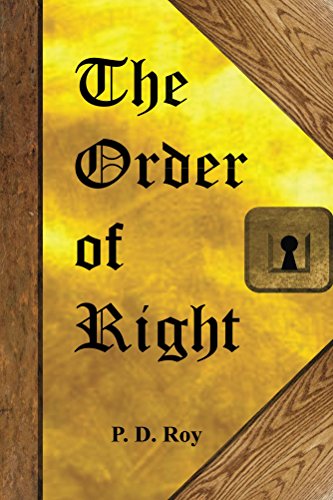 Book: The Order of Right by P. D. Roy

about this book: This is the story, chronicled by the scholar Raelic, of the rise of the charismatic prodigy Lucian, who uses his art and his silver tongue to seduce first the established authority and then the underclass, to build a collective which he leads out of town by the end of this volume. Unlike most stories, there is a special emphasis on the philosophical conflict between sacrifice for one's own children verses sacrifice for a faceless collective. By the end, Raelic himself and three other talented youths harmed by Lucian in different ways are inducted into the Order of Right, for the purpose of finding Lucian and return his misled followers back to the fold. Since this is supposed to be Raelic's writing, I wanted it to look like an old book, with leather spine, gold foil covers reinforced with oak corners, and a brass latch. I used old English font to emphasize the same idea. This volume of the story also chronicles Raelic's rites of passage and challenges in his childhood and adolescence, and moderate detail about various medieval crafts which Raelic apprentices to as part of a special rounded education lined up for him by his father. I consider that the philosophical discussions and details about crafts have educational value to young adult readers. In fact, my inspiration was my desire to communicate to teens and young adults my personal philosophies through the characters, and that drove me to finish the entire text between May and July. I originally called it "Raelic and the Order of Right" but that just seemed too long. "The Order of Right" summarizes what it's members stand for: truth, justice, wisdom and good. It also suggests conservatism, which is how most people would interpret the values of the protagonists. Having said that, quite a lot of what Lucian does is praiseworthy, except that his followers surrender themselves to the collective, and in the future they will see what that gets them. I also intend for the protagonists to learn how to better tend to the underclass to avoid a repeat of this kind of upheaval. One thing is that writing this force me to learn how to make the eloquent rhetorical case for Lucian, even as I understood how such utopian schemes devolve. Toward the end of this volume he starts to be called the Devil Lucian, and it was only after thinking about it for a short time that I realized my unintentional pun.

The hardest part of writing was coming up with the scheme and timeline for Lucian's machinations in the last few days of this volume of the story, and to make sure it was sensible even if not everything is revealed. I wanted some mysteries to remain, but nothing I would call a plot hole. The reader may not always understand Lucian's reasoning, or how he was able to accomplish certain things, but that is part of the mystery and at least some of that may be revealed later. In the course of writing, I researched quite a lot of things on a wide variety of topics, too many to mention, but mostly about life in a stereotypical medieval European town. I meant for it to be a semblance of that time, though not a perfect one, but enough to take us out of the present and recognize it as something different.

Ultimately, this is perhaps like some other stories that warn about utopian collectivists who want to micromanage our thoughts and lives and remake humanity according to their own vision and against human nature, as a replacement for a more traditional society that rewards the better parts of human nature and punishes crime. I wanted the young to appreciate the natural family and those "classical liberal" traditions and institutions which have created the greatest benefit, and to recognize and reject envy, spite, hysteria, dogmatism and hate-mongering no matter where they may arise from. It is my hope that both left and right can find the way to accommodate each other in this wide world.