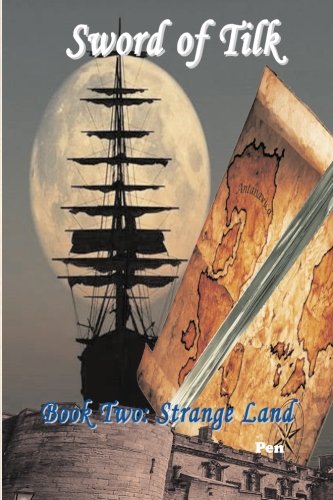 about this book: When I first began writing The Sword of Tilk it wasn't a trilogy. However, the more I wrote, the more I realized my characters had a journey to take. And it was going to take them more than one book to get to where they were going.

It was something of a surprise to me, but a pleasant surprise all the same.

After vanquishing the enemy of the Realm, Balfourant, Barbara looks forward to settling in to being one of the Queens of the Realm of Tilk.

She hardly has time to catch her breath when a new threat appears.

Those living in the Tilk Realm believe the Realm is the world: nothing lies beyond the Realm of Tilk.

Until one day a ship sails into the harbor.

Hailing from the distant land of Antanvica, pirate Gregorio dazzles all who meet him with his colorful attire. But not in a good way. He raises the suspicions of everyone and with good reason: he is there to take the Sword of Tilk to wizard Ravenheart.

But he must kidnap Princess Heather in the process for none can wield the Sword save a member of the Royal Family.

This takes our intrepid heroes to the distant land of Antanavica, proving there is more to their world than just the Tilk Realm.

Along the way they encounter the Crystalwood forest – not as pleasant as the name denotes – and the vile creature the Ameeglia.

Even though they rescue the Princess, they must leave one of their own behind.

The continuing adventures of Barbara, her twin sister, Tiernan, Fen, and Sir Wolfcreed provide entertainment suitable for the entire family.