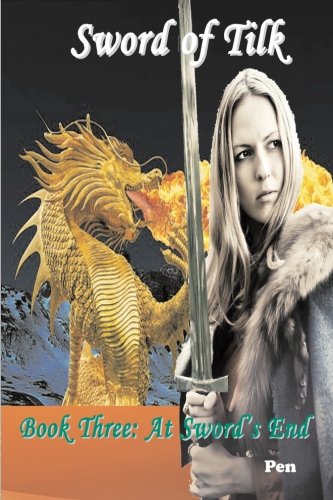 Book: Sword of Tilk - At Sword's End by Pen

about this book: As the writing of the Sword of Tilk Trilogy drew to a close, I was somewhat saddened. I had gotten to know my characters quite well. I lived with them on a daily basis for several months. They went to work with me. Ate dinner with me. Kept me tossing and turning when I tried to sleep because it's very difficult to turn off the creative muse when she's on a roll.

In the final analysis, I had a world of fun writing these novels. These characters are some of the liveliest I've encountered. My imagination was stretched farther than it has ever been stretched before and I only hope it will not snap back into place anytime soon.

Desdemona is the mother of Balfourant. She disappeared from the Realm one day though her presence was missed by none but her son.

After being imprisoned in a dungeon in her father's castle for over thirty years, Desdemona returns to the Realm of Tilk to seek revenge.

This sends our heroes back to Barbara's (our) world for a short period of time. Until, that is, the dragon eggs are ready to hatch and a member of the Royal Family must be there to win the dragons' loyalties to the Realm.

Desdemona must be in possession of Ravenheart's spell book which Heather stole from his castle and the Sword of Tilk. With these in hand, she has all she needs to destroy the Tilk Realm. And the many worlds beyond.

It is up to Heather to stop Desdemona before that happens.