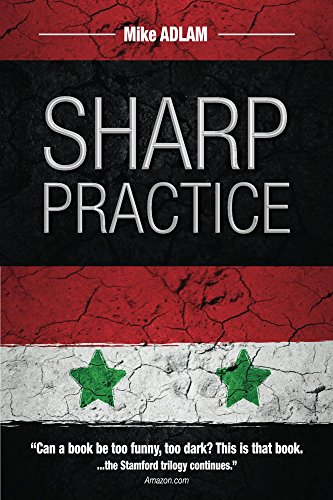 about this book: Released from prison and bereft of his licence to practice, philandering surgeon Tony Stamford sets about restoring his fortunes administering to the most private medical needs of Hampstead's wealthy women. However, when his past comes knocking in the guise of Detective Inspector Newcombe, he is forced to seek refuge in the bosom of Médecins Sans Frontières, the Foreign Legion of the medical profession. Spurned by them, a chance encounter leads him into the dark and labyrinth world of Lebanese Minister for the Interior Khoury, the horrifying Syrian conflict and then into the even darker world of international arms dealer Peter Chisholm.

As always funny and dark by turns, Sharp Practice, the second book in the Malpractice trilogy, takes the reader on an odyssey through the very darkest realms of human nature as hapless anti -hero, British surgeon Tony Stamford, finds himself yet again fighting for his very survival in war torn Syria.

• 'Darkly comic, beautifully paced, the novel is crammed with an almost Dickensian sense of atmosphere and turbulence, yet blessed with the deftness of Waugh. Full of great moments, it also succeeds in being momentous and very funny'
— Goodreads.com

• 'A no-holds-barred, pull-out-all-the stops, breathless tangle of a thriller full of dark comedy…A heck of a good read… admirably plotted, full of vitality, a novel that is truly comic, and, like all true comedy, also disturbing'
— Amazon.com