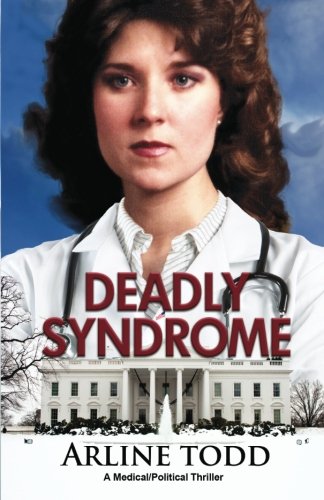 about this book: Deadly Syndrome is a mainstream thriller with a touch of romance. The heroine is Resa Myles, a gifted molecular biologist who isolates the first cancer virus and later heads a group of researchers seeking a vaccine to both cure and prevent the disease. Funded by the government, control of a promising vaccine is wrested from Resa. This is when the trouble starts. The vaccine becomes a political tool and is released worldwide too early, resulting in a lethal syndrome. There is much political in-fighting as chaos becomes the order of the day on a worldwide level. Along with her lover, CIA agent Steve Sheldon, Resa ends up fighting for her life while she leads other researchers in developing an antidote to the syndrome.

Comments from early-reader, 5-star reviews on Amazon.com are:

• "Dr. Resa Myles is intelligent, strong, courageous, loving, and compassionate. She has to deal with corrupt politicians, a plague-like syndrome, spies out to kill her, a former lover, a terrible family tragedy, and civilization falling apart, and she does it all extremely well."

• "I read this book on a friend's recommendation and very glad I did. The characters were well developed and the subject matter was right up my alley."

• "I had [this book] for several weeks, before I finally got around to reading it, and then couldn't put it down. Very well written and exciting from cover to cover."

• "I chose this title because I love medical thrillers. It was a great read."