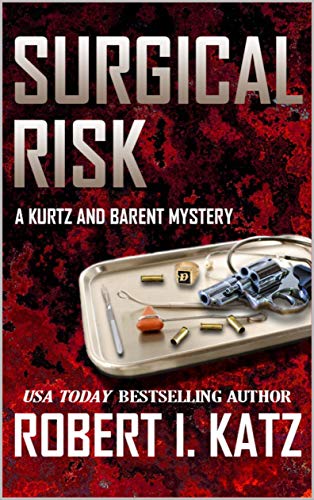 about this book: This book, the first in my Kurtz and Barent mystery series, was inspired by Patricia Cornwell, Jonathan Kellerman, Robin Cook and Kathy Reichs. I'm a physician (anesthesiologist) and had been writing for a number of years before coming up with the idea for the series. I wanted to write a mystery that was set in a hospital with a protagonist who was just a little different than the people I worked with day in and day out. Richard Kurtz is the result.

Kurtz is a country boy from West Virginia. He's ex-army, six foot, two inches tall, 220 lbs pounds, works out 3 times a week. He's good with a gun and he has a black belt. Kurtz has a reputation in the hospital as a tough guy, a reputation he regards as absurd, despite the 300 lb biker who he recently knocked out and sat on in the ER. And when Sharon Lee, an OB-GYN and a former girlfriend, is found strangled in a hospital call room, Kurtz cannot resist getting involved.

Lew Barent, the other half of the mysterious duo, is a New York city cop. Barent is a homicide detective. He's seen it all and nothing can surprise him, but Richard Kurtz does not fit Barent's preconceived notion of a physician.

Together, they wind up investigation a twisted tale of murder, betrayal and revenge.