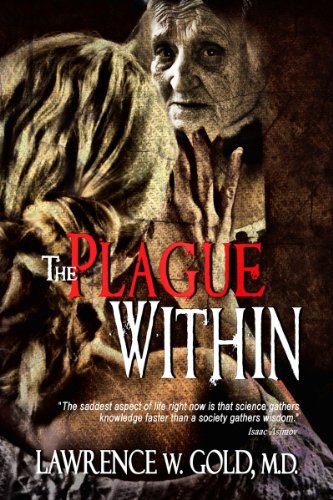 about this book: The Plague Within is the latest in the Brier Hospital Series.

Like in all my medical fiction, I try to combine the reality of the medical setting with the drama that's intrinsic to practicing today.

In this novel, I took the opportunity to extrapolate the potential of gene therapy into the future. In my mind, the events as described are so nearly here, that science fiction almost doesn't apply.

When I read the medical literature, the newest discoveries sound, too, like fiction, but they're, in fact, reality.

When I was in practice, patients frequently brought me articles on the latest and greatest "advances" in medicine. Like most physicians, I had learned to be skeptical about such "advances" because too often, they did not pan out or were associated with unacceptable side-effects. As a novelist, however, I can give free reign to these speculative practices without hurting a soul.

• From Grady Harp, Hall of Fame Reviewer: This novel is a terrifying exploration of the evil that is inherent in all fields - greed and malice - and medicine is not free of that flaw as this story about the use of an experimental viral vector as advanced by an unscrupulous research scientist more obsessed with his project than with the welfare of the patient of one Dr. Harmony Lane. In the manner of all novels of terror, the struggle between the at times vanity-driven need for cure comes up against the realities of a possible series of lethal results: therein lies the terror, almost as heavy as the idea that such manipulations of experimental drugs are indeed part of the picture these days.

• From Miki Hope Review: Gene therapy is a hot topic these days and no matter how you feel about it you will love this book. It does give you insights into the medical profession. It also shows how researchers can manipulate statistics when it comes to test results to prove their point!! Even though this book is fictitious-it could very easily happen given the right circumstances. This is another one of those page turners that you won't be able to put down ---