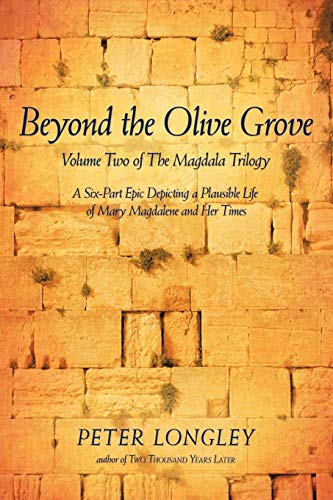 Book: Beyond the Olive Grove - Volume Two of The Magdala Trilogy - A Six-Part Epic Depicting a Plausible Life of Mary Magdalene and Her Times by Peter Longley

about this book: BEYOND THE OLIVE GROVE is the middle volume of THE MAGDALA TRILOGY by PETER LONGLEY, a plausible life of Mary Magdalene and her times. This volume continues the story of the lives of Linus Flavian, Maria of Magdala and Joshua of Nazareth. Although the New Testament accounts of Jesus' ministry and passion are recognizable throughout this volume, the interpretation and the setting is quite different. In keeping with the commercial nature of the Roman world that is in the first century taking hold in Judea and Galillee, Joshua's followers are seen to be serious commercial fisherman whose business leader is Judas Iscariot. Pickled fish from the Sea of Galillee and the towns and villages around the lake are much desired by Roman consumers, and Capernaum is the center of this industry. This sustains the itinerant preaching journeys of the group's spiritual leader, Joshua of Nazareth. Among the fishermen, however, Joshua's spirituality is misunderstood and it is only Maria, or Mary Magdalene, who becomes attached to the group with her young son, Marcus, her bastard child by the fictitious Roman Linus Flavia, who really understands him.

This causes bitter rivalry betweeen Judas, the commercial leader, and Maria. This is manifest at the arrest, crucifixion and entombment of Joshua where as in the synoptic gospels, Mary Magdalene is the only follower of Joshua to stay with him to the end. The spirituality that Joshua shares with Maria and that the others fail to grasp is closer to that found in the so-called gnostic gospels of the Nag Hammadi texts of second century Egypt, including the GOSPEL OF MARY (Magdalene.) The love interest in the novel between Maria and Joshua was initially inspired by the character of Mary Magdalene in Andrew Lloyd Webber's rock musical JESUS CHRIST SUPERSTAR, but since then, there has been a lot more serious research on the possible relationship of Mary Magdalene and Jesus and her probable importance in certain divisions of first century followers of the Christos. That the role of Mary Magdalene in interpreting the spiritual message of Jesus should be taken seriously is the scholastic purpose of this work. This is taken further in THE MIST OF GOD, the final book of THE MAGDALA TRILOGY that deals with the tumultuous origins of early Christianity. Vivid descriptions of Jewish and Roman first century life abound throughout THE MAGDALA TRILOGY bringing Maria of Magdala's times alive on every page.

• "Longley's volume is scrupulously researched but endlessly creative. Further, its historical Maria and its fictional Linus are worthy foils to the still-strong Joshua. A provocative new picture of the 'historical' Jesus." — KIRKUS DISCOVERIES