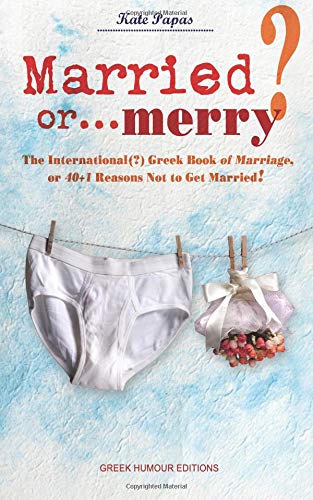 Book Reviews: Married or... merry? - The International(?) Greek Book of Marriage, or 40+1 Reasons Not to Get Married! by Kate Papas

about this book: "Life-with or without softener-is hard." "Years fly by like crazy." "Life -again- keeps changing without giving a damn about our personal feelings."

You've just read the three most important reasons why, for some time now, I have decided to focus on the hilarious, the pleasant, the agreeable -and so on- aspects of situations, in my life. In order to keep myself sane. This is how "Married or... merry" was "born".

My first text about marriage was in Greek and it was supposed to function as a consolation to all -married or unmarried-people, including me! A friend, who read it, told me it was worth publishing. This is how my "text" appeared as a book, for the first time, in my country, Greece.

And it was another friend who suggested that since this publication proved to be so successful in Greece, it should be published in English, as well.

Of course a translation was out of the question. Translations are like women: if they are too loyal they are not impressive and if they are impressive they might not be loyal. This is how my second book on marriage, in English this time, was born!

In a nutshell, "Married or… merry" aspires to set you off on a voyage across the most popular "Greek" Reasons why you should not get married. But I'm quite sure that after having finished it, you'll have realized that these "Reasons" are not exclusively Greek at all. This might even happen automatically, because during our trip we will keep visiting "International" Reasons, with well-nigh exactly the same meaning.

For now, I think there is nothing more to add, but only to wish you a good journey.

When I started reading this book, I thought it would be a "manifesto" against marriage (and I was sort of scared - you see I'm preparing to get married in August...). After finishing it, though, I realised that it can be considered FOR marriage! What I mean is that this cute little book describes so hilariously -yet so accurately- the whole topic, that all you have to do is "watch out" and "take" the challenge not avoid it.

Now I feel more secure about what will be next (in my marriage, I mean) and I'm determined to deal effectively with every possible problem that emerges in my future-married life. Besides, I've concluded, that everything depends on one's point of view and -of course- of how decided one is to be MARRIED AND MERRY! [by Alice Panagos]

Some time ago, I had read MS Papas book on Marriage, in Greek. I admit that I decided to read what I thought it would be a translation of this first version, just to practice my English. I was surprised to find out that the "English version" was an almost completely new book!

I mean the main idea may be the same (possible traps and difficulties in a marriage), but all the rest was new. Wise and funny mottos, by well-known personalities from all over the world, made this "new" book even funnier and more … instructive; persuasive and of International interest!

I also found the English book on Marriage, by MS Papas, more balanced, because it also favors men, giving their perspective on a sensitive matter, such as marriage. What's more, I think it is a genius idea to make it possible for foreigners, to learn that the Greek reality on this matter, is not so different (not to say it is exactly the same!) from theirs.

I strongly suggest that everyone, married or not, English or of any other nationality, should read this delightful book. Even if it is only for the fun of it… [by zoe]