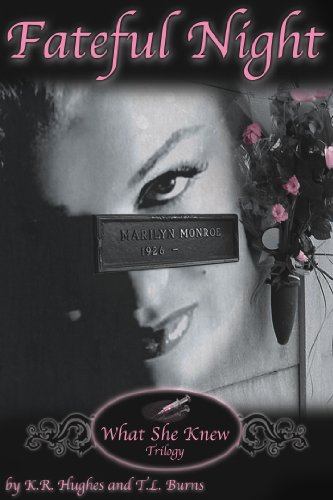 about this book: Did Marilyn Monroe commit suicide? Did someone get away with an elaborate plot to murder the famous sex goddess? On that "Fateful Night" in August 1962 find out what may have happened to her and why she was killed. Many argue that she was involved in way too many secrets from different factions of the world. She was a smart woman who could play the dumb blonde to attain her stardom yet she unwittingly learned of conspiracy plots and political threats that would not only end her life but that of the current president, John F. Kennedy.

In this fast paced suspense every major player of the early sixties is involved, from the world politicians, to the Rat Pack, to Hollywood, and the mafia. What if Marilyn Monroe had lived and what if what she knew could have saved JFK?

Here's what some fans have said:

• Jane Carroll: I found myself transformed into the past, sometimes questioning if the events were real or part of the story. And honestly, I'm still not certain about some of them. To me that is the beauty of a well-crafted book.

• G. Mitchell Baker: Loved it! My read of `Fateful Night' came after reading the non-fiction, "The Agency: William Morris and the Hidden History of Show Business" by Frank Rose. This was my take-off point for reading this fiction and insider history about `Marilyn'. I appreciate the creative leap taken here by the authors Hughes and Burns.

As we began to play with the idea of writing an entire book around a "What if?" question our excitement grew. Who do you know that doesn't get into the conversation of did Marilyn Monroe kill herself or was she murdered? No matter what side of that question you're on, the debate is always a good one. In that light, we decided to see if a book could be written about her and 'what she knew' about politics, the mafia, and Hollywood. What inner workings and connections did they have in common? The question was so intriguing that we decided to carry it to its logical conclusion. Even though it was well known that she'd had an affair with John Kennedy, no one really understood the depth of that relationship or where it could have eventually lead them both.

She knew too much and was far from being the "dumb blonde" she portrayed in her films. After all, in her own words she could hardly play an intelligent role and be taken seriously with her looks. So she did what any woman with a hundred and sixty IQ would do - she played a lifetime role and played it well. Until one fateful night when she revealed that she knew something she shouldn't to someone who needed that information kept secret.

It has lately been revealed that she was murdered and in that light we've written our own version of "What She Knew."

Video: What She Knew: Marilyn Monroe's Other Story LitFlix