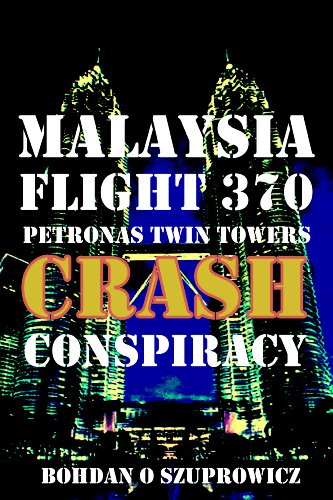 about this book: Who and why made Malaysia Flight MH370 disappear? This is the main topic of this E-Book in an attempt to create several plausible answers to all who are wondering about this mystery.

The author immediately questioned the reason for Malaysia Flight 370 turnaround after flying only about one hour since takeoff. He speculated that this could indicate an attempt to fly back and crash into the Twin Towers of Kuala Lumpur. He also researched in detail the environment where this action was taking place.

The main question in everybody's mind was who did it and why. No one took credit for the disappearance of the plane. This suggests that whatever was planned was not accomplished. The author's fertile imagination took over and came up with several potential ideas outlined in the E-Book.

It may have been that terrorists took over that flight, planned to crash it into the towers, and claim that Israel or USA did it in revenge for the destruction of World Trade Center in New York on 9/11/2001.

However, the conspiracy to do it could have been discovered in time to take action and prevent it from taking place. As a result somebody made decisions to scramble night fighters which diverted and shot down MH370 probably into the deepest canyons of the Indian Ocean west of Sumatra. Malaysian,Indonesian or even American fighter jets could have done it.

In order to hide the truth an elaborate program of searching for the missing plane was organized. The coverup was developed to get the world's attention away from what happened and where it happened.

The E-Book provides something of a screenplay synopsis taking into account all factors involved. It is ideal for all who want to speculate, speak, write and otherwise get involved in looking for the missing plane and its passengers.