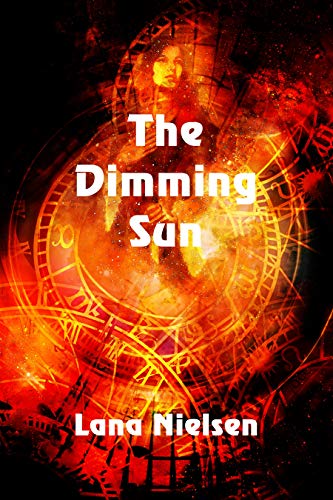 about this book: Ash has blotted the sun for months, and turmoil is spreading across the medieval continent of Linnea. People are searching for answers amid the despair- some have turned to ancient superstitions, others to the seductive teachings of strange new cults. However, young Arithel isn't too concerned - she enjoys a comfortable existence as a tax clerk, trying to forget the reckless decisions that got her exiled from her village. One afternoon, she accepts an ill-timed gift that changes everything. She is drawn into a series of misfortunes, beginning with a grave tragedy befalling her pious younger sister.

Arithel's formerly-crippled childhood friend Fallon re-enters her life as she considers her role in her sister's fate. He proposes a deal:

he will help find her sister, if she accompanies him on a quest planned by a mysterious healer who lives thousands of miles away, in the frozen Northlands. Arithel accepts Fallon's conditions, but it soon becomes clear that her friend is harboring dark secrets for his employer, who is more than he seems. The journey she and Fallon undertake tests the depth of their friendship, as they meet new companions and face otherworldly perils. Their choices could destroy-or restore- an empire.

My book hopefully appeals to a broad audience, but I wrote it with fantasy/sci-fi readers in mind. I grew up steeped in the genre, but found that portrayals of strong and nuanced female characters were pretty lacking. There were some "action girls," but they often came across as a bit pristine and self-righteous, with nothing of the moral ambiguity that makes a character engaging. I wrote this book in part to rectify this; my philosophy is that if you don't like something about other people's works, then you shouldn't complain unless you can create your own art. I also wanted to create a fantasy with a faster pace and more action. I like my books to feel like movies! Hopefully with The Dimming Sun, I achieved some semblance of that. I'm an incredibly visual writer; before I put the words down I see the scenes play out in my head. Editing is the most difficult part of writing process, since I have a tendency to be long-winded. The Dimming Sun ends abruptly because it is the first installment of a planned series (either a trilogy or quartet) about Linnea and these characters