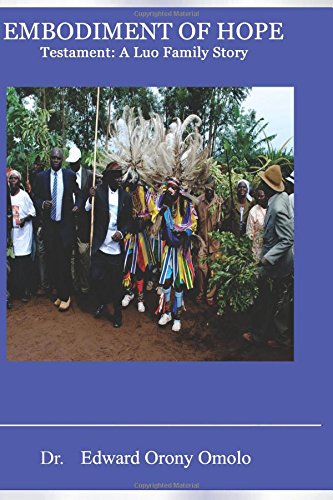 Book: Embodiment Of Hope - Life Story Based On Luo Culture And Customs by Edward Orony Omolo

about this book: I have written a book about my family. Any Luo reading the book should find the story familiar.

I was challenged in writing the book as I tried to weave stories of my own experiences and those of my family into the fabric of the larger Luo community. For readers who are not Luo, I wanted to write a book that would challenge them to reflect on my Luo culture and to compare it to their own. The book uses my family to concentrate the narrative on: Luo history, language, cultural relations, family life, settlements, economy, political and social organization, kinship, marriage, food, religion, education and Diaspora.

My objective was not just to produce a Luo portrait of my family and me. A number of outstanding scholars have done excellent research and written fascinating accounts about the Luo customs, beliefs and practices. I am not a historian or an anthropologist.

I do not even consider myself a writer, but I for years I have had a desire to tell my family's story and in the lengthy process of researching and writing the early drafts, a picture began to emerge revealing the richness of Luo social life. Many readers interested in cultural change will find this book fascinating.

To Luo, the book will be a helpful reminder of their history, customs, beliefs and practices. To modern youth who have Luo roots, but who have been raised in environments that do not support Luo traditions, the book may help them recognize and perhaps understand the Luoness in them.

Writing EMBODIMENT OF HOPE was no easy task. I interviewed many people who relied on what they had been told by others, many of whom were dead. The accounts are factual and truthful perceptions of these people, their recollections of events and conversations as they happened.

I confess I had to take some liberties in trying to reconstruct some of the dialogues. Nevertheless, these interviews provided me with a very useful skeleton to establish a chronology and links in history.

Included in EMBODIMENT OF HOPE is a formal philosophical statement of life beliefs to four women, Ogola Ngare, Flora Kore, Esta Awino and Damaris Ogana and their life skills and relationships with men in the Luo patriarchal community and the children they brought into this world with these men.

The EMBODIMENT OF HOPE is a testament whose theme is an uprising - between Luo traditional beliefs and practices and the western Christian culture introduced by the Whiteman. My effort in writing the book is cognizance by the belief that any society which desires to advance rapidly must first come to grips with the past. It is only from history that can a society find the lessons with which to tackle the present as it tries to build a better future. It does not matter whether the past is glorious, whether the lessons are positive. Actually, it is often our failings — rather than our successes — that determine our values. This reason seems self-evident in EMBODIMENT OF HOPE.

The EMBODIMENT OF HOPE is about a journey of intellectual phenomenon. I have been away from Kenya (Dala) for 36 years. In all these 36 years I have been convinced that I was living abroad or overseas in the United States as a student, but the focus was altered I was living a different life in the Diaspora. It now turns out that I am one of those emigrants and their descendants who came to live in the Diaspora because the "Diaspora" is an intellectual phenomenon beginning with the idea of emigrating overseas or abroad as a student who advances and become professional and turns to intellectual economy.

I am one of those emigrants referred to as dispersed population (Diaspora) who have acquired residency outside their homeland and are eager to use advantages acquired from residence outside their countries and use them to generate return of output resources that might help the stay-at-home populations in their homelands in order to improve their lives. Luos reading the book and living in Diaspora should find the story familiar.

For readers who are not Luo, I wanted to write a book which would challenge them to reflect on my Luo culture and to compare it to their own. I have made every effort to be accurate, as well as to capture the "stories and the people behind the story." Despite my best efforts, I may have missed some important episodes, failed to mention important participants, and misinterpreted in some instances what I heard or read. If the story as I have reconstructed it rings true, then due credit should go to the actors and sources on which I based the narrative. However any error that may arise in part, form, or manner in this book, I take full responsibility.

I hope you find this book interesting, informative and even inspiring. The names, dates and places used in this book are real but I have attempted to shorten them by using the Christian or European names instead of the native Luo names to make them easy to read and pronounce. Where I introduce names or phrases in Dholuo (i.e. the Luo language), the English equivalent will be followed by Dholuo which will appear in italics. There is also a glossary of these terms at the end of the book.