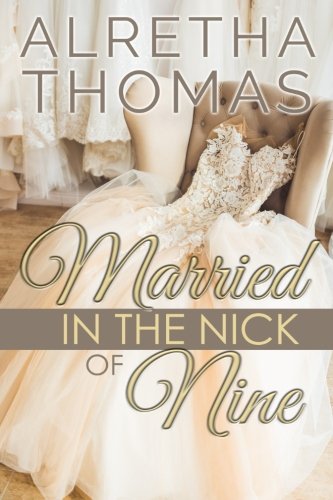 Book: Married in the Nick of Nine by Alretha Thomas

about this book: One might think Married in the Nick of Nine is another chick lit book about some desperate woman's quest to get married. Don't judge a book by its captivating title and beautiful cover. Married will surprise you with its fresh take on the pursuit of matrimony while it depicts Cassandra Whitmore's journey to find "The One" within nine months. Few roller coaster rides could rival the sheer adrenaline rush that the novel, filled with mind blowing plot twists and turns, offers.

Childless, not by choice, I cherish the creative process. This is my third baby, and she was not planned. I began writing in early 2011 and shelved her after penning thirty-five pages. Later that year, I was laid off and decided to send out a query. To my surprise, an agent requested the entire manuscript. Not wanting to lose the opportunity, I finished the book in four days. Needless to say, there have been countless revisions since then. As one reviewer eloquently said: "Married in the Nick of Nine" is one of the year's best love stories.

Video: Married in the Nick of Nine by Alretha Thomas