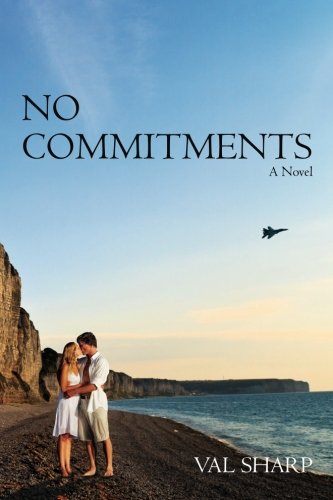 Book: No Commitments - A Novel by Val Sharp

about this book: NO COMMITMENTS begins in the summer of 1965 and is about a quixotic – on again, off again – love affair between a young navy pilot, Clay Stoner, and Marianna Haizet, daughter of a wealthy Swiss banker who attended girls' boarding schools most of her life and is now starting graduate school at Juilliard. He is scheduled to deploy on an aircraft carrier to Vietnam in a few short months. She becomes immersed in his life and those of his squadron mates and girl friends awaiting that day: the rowdy parties, the drinking after the deaths of fellow pilots, an affair each thinks will lead to nowhere. In the process, she helps him realize he cannot bomb innocent human beings. He turns in his wings, a legitimate right, but he is court martialed on trumped up charges, stripped of his commission, and sentenced to prison. Before that can be carried out, she helps him escape, and he returns to the South of France where they first met. Clay obtains a job as a bartender in a nightclub. After her graduation and being disowned by her father, Marianna joins him and joins a band as the lead singer at the nightclub. The club is owned by an infamous businessman who heads a financial conglomerate in Monaco. He discovers them, offers Marianna a music contract, and hires Clay as a corporate pilot.

By the end of 1970 the love affair has started to become rocky. Marianna has become a singing/songwriting star and Clay, a burned out pilot. He discovers evidence of illegal secret bank accounts maintained by his employer for some of the most important businessmen and government leaders of the day, and he and Marianna concoct a plan to reveal them to all the world.

The inspiration evolved from a few short stories that I wrote over the years that I cherished and which I thought could be patched together and reorganized as a novel, a story I wanted to tell.

Throughout the novel are scenes and conversations relating to the frenetic times of the late 1960s: mini-skirts, paper dresses, the early bombings in Vietnam, oppression caused by the draft and the youth flight to Canada, the 1968 Columbia rebellion, Kent State, Washington peace demonstrations. I think its readers should be anyone who enjoys a love story, including those who are of the age who might want to reconnect with those times, and younger readers who might want an eye opener to experience what it was all about.

Starting with those few short stories that I dismantled, I started the novel in earnest in early 2011 and finished in about 10 months. It took another 6 months of thrashing around before I self-published on Amazon.

The title was simple: from day one Marianna and Clay always swore to each other that they had "no commitments."

The hardest part of writing was deciding how it should end: happy or sad. I wrote two five page endings that incorporated each.

Little research was involved – some facts involving dates and places – but mostly the story was based on experiences and imagination.

What I learned in writing the book – and from listening to a TV interview of Grisham – is to not start a novel without spending some time outlining every single chapter – which is what I am doing now for my second.

What I wanted to say? I didn't. I asked a question. "What is love? Can ideals triumph in a world of compromise?"

The epigram underlining Part One by Bruno Lessing perhaps answers part of this question: "Love really has nothing to do with wisdom or experience or logic. It is the prevailing breeze in the land of youth."

The award winning author, Kenneth T. Jackson, recipient of the Bancroft and Francis Parkman prizes for Crabgrass Frontier, had this to say about the novel. "Marvelous…A tale of love, betrayal and political intrigue, it engages, entertains and energizes the reader."