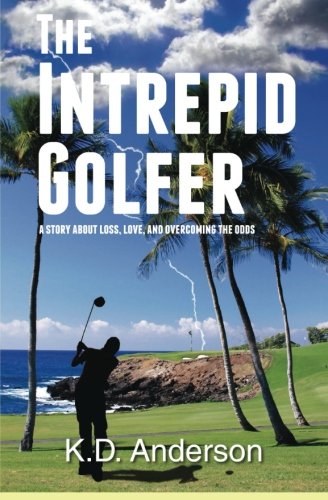 Book: The Intrepid Golfer - A Story about Loss, Love, and Overcoming the Odds by K. D. Anderson

about this book: The Intrepid Golfer is a story about a man that is struck by lightning and has a near death experience that changed him forever. For one thing, he could hit a perfect golf shot every time. But trouble loomed and he would need the support of his golf buddies and his new love, Lilly Yamada, if he was to survive the journey ahead.

My wife and I were playing golf on the Big Island of Hawaii when a thunderstorm rolled in. The sound of lightning strikes were getting louder and louder and we decided to head back to the club house. On the drive in the rain back to Kona, Hawaii, the idea for the story came to me almost fully formed, along with the title and the fact that the main character would be Japanese American and he would be addicted to golf and fearless in his pursuit of perfection.

I wanted the cover to immediately reflect the location (the tropics) and a troubled sky off in the distance with the golfer in the foreground. I had met a young graphic designer from a local university while he was doing an internship at the Ronald Reagan Presidential Library. I described the concept of the image I wanted to convey and the cover represents his third draft.

I had difficulty organizing the beginning of the book so it would grab the attention of the reader in the first page or so and still provide the background story needed to understand where the protagonist was coming from. I felt there was a danger that the story would drag while I established the foundation and introduced the other character's. The other challenge was to figure out a way to present the historical background of the protagonist's father so the reader could have some understanding of the cultural foundation of Japanese Americans. I ended up with the fathers diary which was brief and direct in style as might be expected of a soldier in the field, in and out of battles and usually exhausted and hungry.

I am old enough to remember some of the events of World War II. However, I did extensive research on dates, and events that lead to the decision to put all Japanese Americans in the western United States into interment camps. Also significant time was spent on the history and deployment of the all Nisei 100 Infantry Battalion and the 442nd Infantry Regiment.

I discovered that writing a fiction novel partially based on real life events is an amazing process. The character's in this story became a part of my life. I found I would suffer with them and rejoice in their happiness. Part of the challenge was to try and truly understand how they would react to events as the story unfolded. It was a terrific experience.

During the four and half year journey while writing this story I have developed a keener sense of appreciation for the events of each day in my life. I have become more invigorated and my gratitude list has become much longer. The way the character's conducted their lives gave me motivation to try and be a better person and to be quicker to reach out and touch others in a positive way when it is possible. It has been a truly amazing experience.

Readers, if any of you have a chance, take a shot at writing a story. It may be your own life story or a made up one. The value may be the ability to express your self without judgment or censoring, (by yourself or others) or it may be the freedom of make belief. You can become a little kid again and believe in heroes and heroines and magic. And in this process you might actually uncover new dimensions about yourself. Maybe you already live a heroic life, or maybe greater self awareness will touch your soul and make you more whole. Its free and its yours…take a chance.